If we want to use these ideas in real world problems, we need to be able to estimate partial derivatives using data.

Here is some pretend data – for concreteness’ sake let’s say that the y-axis is pressure (perhaps from from sea-surface height measured by a satellite altimeter). For example, it might be the pressure as a function of distance to the east (x) holding depth (the z-coordinate) and latitude (the y-coordinate) fixed. 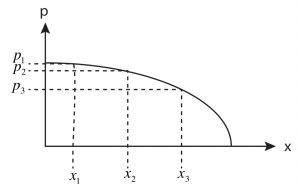 Why did we use points 1 and 3?  If we used either points 1 and 2, then the resulting tangent line would have a slope that is more appropriate to a point that lies between points 1 and 2.  Since we want the tangent line slope at x2, we choose to take a difference using points that are centered on point 2.  Not surprisingly, this is called using a centered difference approximation.  Had we used points 1 and 2 to calculate our

Where does this formula come from?  We want to approximate how the slope of a tangent line changes in x.  We use a centered difference first derivative to estimate the tangent line slope at point half way between x1 and x2, which is the point

.  And then we do the same for points 2 and 3, which gives an estimate for the point

since the points are at the half-way marks).

Add some algebra to turn it into the previous expression!