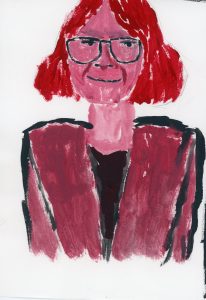 Velma Veloria was born in Bani, Pangasinan, Philippines; she immigrated to the United States in the 1950s. Veloria graduated from San Francisco State University then returned to the Philippines where she witnessed violence and oppression during the Marcos Regime. When she returned to the United States, Veloria joined the Union of Democratic Filipinos (KDP) to help put an end to the United States’ support for the dictatorship of Marcos. Veloria became a labor activist throughout the 1970s and 1980s through her participation in the anti-war and Asian American student movements. She worked as an internal organizer for the Office of Professional Employees International Union, ILWU Local 37 cannery workers, and in Service Employees’ International Union campaigns in San Francisco, New York, and Seattle to organize office workers and nurses. After the ILWU Local 37 Officers were murdered, the KDP transferred Veloria to Seattle to maintain the union reform movement in the Alaska cannery industry.

In 1992, Veloria became the first Filipina in the United States to be elected to a State Legislature. She served until 2004 as a State Representative for South Seattle’s 11th District. Veloria advocated for affordable housing, workers’ rights, and racial justice. She partnered with legislation to combat human trafficking of labor workers. Veloria worked with the UW Womxn’s Center to gain passage HB 1175 (making human trafficking a crime in the State of Washington) after the shooting of three Filipina Americans in the King County courthouse. The Filipino American community was devastated after the deaths were announced. As a public figure to the Filipino American community in Seattle, Veloria wanted to regulate the mail-order bride industry in Washington by holding these businesses accountable for documented proof of registration, and to pay taxed. Following the enactment of HB 1175, there were 48 states in the nation that passed similar legislation.

Veloria continues to serve as a co-chair member to the UW Womxn’s Center Anti Human Trafficking Task Force. She is also serving for nonprofit organizations, Faith Action Network and the Coalition of Immigrants, and Refugees and Communities of Color. Her experience as an immigrant living with racism, discrimination, and American imperialism has encouraged her to seek out leadership and advocacy opportunities. In 2019, the University is proud to welcome Veloria, Director of Advocacy and Mobilization for the Equity in Education Coalition, as their first Honors Curriculum and Community Innovation Scholar. She will mentor students as they identify causes and methods for community organizing. During her two-year arrangement at UW, Veloria will create an anti-human-trafficking course. Her presence among college students will create more room for engagement and opportunities. Veloria’s role in Honors begins in Fall of 2019.