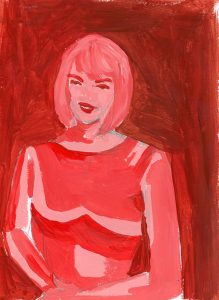 Danni Askini is a transgender activist who is from Seattle, Washington. She is one of the founders of the Gender Justice League, a transgender rights advocacy organization based in Capitol Hill. Askini ran for a state House seat in 2016 for the 43rd Legislative District but dropped out of the race to reign her focus on fighting against I-1515, which limited bathroom access for transgender people. Her position always made her a target for threats and bullies – however, tensions rose after she and other organizational groups created a lawsuit against the Trump administration’s military ban on transgender people. Askini began receiving death/sexual violence threats from white nationalist and neo-Nazi groups; in a two week span she received over 12,000 hate emails and mail. She was even followed and ran off the road once by men who were harassing her, making her crash into a guardrail. Fearing for her life and family, she decided she needed to flee the U.S in hopes of surviving. She chose Sweden, having previously held a 10-year residency there and even had an ex-husband that still lives there. All she had to do was renew her passport that had previously expired, however, it wasn’t as easy as she thought. Her renewal was rejected since she had to show all of her previous names and proof of citizenship, which also required doctor’s notes since she changed her name and gender marker. In the end, she was denied a passport since she couldn’t prove her gender reassignment surgery and it didn’t match her original birth certificate. Askini eventually got an emergency 2-year passport and has been living in Sweden since July 2018. She’s currently trying to obtain asylum since she is still being denied a passport from the U.S and residency in Sweden. She has spoken and worked with 16 different lawyers to try and get her rights as a transgender womxn. Although she has had to step down from the Gender Justice League, she still mentors and hosts conferences with other organizations, and works to make sure the organization is still moving

forward and fighting for equal rights. Askini’s fight still continues on to this day, as she is currently still trying to obtain her passport while living in Sweden. Her story has spread across the nation, gaining supporters to join her in the fight for better transgender rights with citizenship and identity. She has started a fundraiser to raise funds to help people of Washington State get ID’s with the appropriate gender marker to reflect who they are, that got partnered with the Bill and Melinda Gates Foundation that will match any donations that are given towards it. And the Gender Justice League has even started a GoFundMe account to help with her expenses with lawyers and legal fees. Danni Askini isn’t just an inspiration to the transgender community, but to all other activists as well.