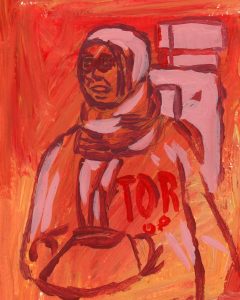 Naima Shaltu is a student at the University of Washington Bothell majoring in Society, Ethics, and Behavior and Health Studies. Before coming to the University, Shaltu was introduced to the world of poetry. In the 5th grade she realized that she finally found a space for her to be the person she wanted to be and break free from the expectations others placed on her. She continued to pursue this passion throughout her high school career and was supported by students and teachers alike. At UWB, Shaltu decided that she wanted to share more of herself with the world. Consequently, she attended all of the open mic events that she could find. Shaltu found solace in her community as she shared her pieces. Through this journey, she learned a few things. First, she was not self-made, meaning she wouldn’t be where she is today without the constant love she received from the people around her. Additionally, Shaltu noticed that the people she credited with her success weren’t recognized. She wanted to find a way to put them on the forefront and give them the recognition she felt they deserved. With their suggestions and help, Shaltu started Story of a Hijabi, a blog where she shares lessons she’s learned from those who helped her get to where she is now. This provided a platform to change the narrative about Muslims, women, and people of color (Shaltu, 2017). She learned  more and more that documentation is important, and admits that before this blog, she had no idea how to edit videos, take pictures, or to document everything. However, she put in the work watching YouTube videos, playing around with editing softwares, and gathering as much content as she possibly could. She wanted everyone to know that just as she took ahold of poetry to make something of herself, others can do that, too. One way she worked to instill this belief was to take pictures with her back to the camera, so that people could envision themselves in her place. Shaltu’s love for others and their well being brought her to the realization that everyone needs to be supported just as she was. By her junior year she was noticing that everyone around her was getting burnt out. Primarily as they had to fight for their right to spaces on campus and the ability to practice their religious obligations. She wanted to do something to help. Shaltu decided to research resilience practices and took classes that helped her understand how one may be able to better take care of themselves. In April 2019, Shaltu released the RISE UP program (Resilience Involving Student Empowerment through Uplifting Poetry) to guide students through stressful situations and learn how to be resilient in a capitalistic world that values productivity over well being. Shaltu views this program as paying homage to those who supported her in the past, and who continue to support her in the present and future.