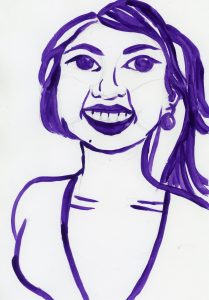 Reema Zaman has proven that our voices matter. She is the author of the memoir, I am Yours, where she shares a story of hope as she guides the reader through her life. She is influencing lives with her presence on social media in an era where we see womxn taking a stand and using their voices. Zaman is also the creator of “Dear Reema” where she responds to reader’s letters of healing and other topics. However, Zaman didn’t arrive to this place of healing and influence without struggles.

Growing up as a Bangladeshi womxn, she was taught that a womxn’s primary role was to take care of the home and the family, and to self-sacrifice for the father’s needs and comfort. This lifestyle became her “normal” and her silence and submission was what she would contribute to make what she thought to be the “ideal” relationship. It became what she unintentionally looked for in her future relationships.

At age 18, Zaman’s high school psychology teacher had been inappropriately sending her letters and calling her using the classroom phone. She reported this to the school principal who replied, “Thank you, I will handle this. Thank you for keeping this quiet.”, assuming she wouldn’t tell anyone else.  The teacher went on teaching like normal and she was silenced and her story was not taken seriously.

At age 23, as an actress in New York, she was raped. Her submission was expected, and her voice ignored. Then at age 24, she was modeling at a photo-shoot where the photographer announced it was time for her to expose her breasts. He was expecting submission to what he had asked her to do without her consent. Zaman refused, found her voice, picked up her clothes, and left the shoot. She was slowly finding her voice.

At age 27, she was married to a man who was emotionally abusive. He had a taste for other womxn and started policing the way she dressed and how much makeup she wore. He would justify his actions by saying things like, “It’s for your own good”, “It’s only because I love you”, or “You make it so hard to love you”. Finally, she decided that she would not be silenced and policed anymore and said “NO”. She found the courage to leave him and start on her journey, where she would become the author of her own life.

Reema Zaman has chosen to say that these instances do not define her. She will not be silenced. Now living in Oregon, Zaman has chosen to love herself and to help others find their voice and be the authors of their own lives. She influences womxn and brings awareness through her presence on social media. In the era of #MeToo and womxn of color taking a stand, she has decided to stand strong and use her story as an example. Reema Zaman has proved that womxn’s voices matter.