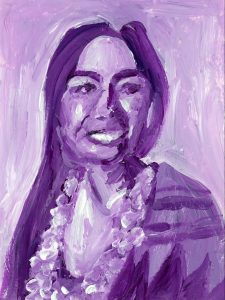 From Washington to D.C., Tulalip Tribe Vice-Chairwomxn Deborah Parker is a pillar of Indigenous leadership and activism about violence against Indigenous womxn. Born on the Tulalip Tribes of Washington reservation to the native name Tsi-Cy-Altsa, Parker was exposed from a young age to many of the problems facing the Native American community, including poor education, high unemployment, and violence against women. Through these lived and observed experiences from her community, Parker has developed an impassioned commitment to social justice and policy reform for Indigenous womxn in the Tulalip Tribes of Washington and across the United States.

Shortly after receiving her Bachelor of Arts degree from the University of Washington in 1999, Parker began to give back to her community by serving for the Tulalip Tribes of Washington to help develop social education programs. Parker was instrumental in developing two programs for the Tulalip Tribes: Young Mothers and the Tribal Tobacco Program. Young Mothers is a cultural initiative promoting resources for teen mothers and survivors of sexual assault, and the Tribal Tobacco Program promotes improved education through responsible tobacco use among tribal members. Parker’s work on these programs landed her a job in Washington D.C. as a Legislative Policy Analyst in the Office of Governmental Affairs for the Tulalip Tribes where she worked directly on policy and legislation reform at the national level for tribal governments.

In April of 2012, Parker burst into the national political spotlight as a central figure for the passage of the 2013 Reauthorization of the Violence Against Women Act. Parker joined the political battle when she learned about a provision that would create federal protections to affirm the sovereign authority of Native tribal governments to exercise criminal jurisdiction over non-Natives who commit domestic and dating violence against Indigenous womxn on tribal land. Parker traveled to Washington D.C. and joined Washington Senator Patty Murray’s Violence Against Women Act lobbying effort. Once in D.C., Parker delivered a powerful speech revealing her personal experience with sexual assault and how strongly these problems have impacted Indigenous women in the Tulalip Tribes Reservation. Parker’s harrowing stories of sexual assault and her recounting of domestic violence against actual Indigenous womxn by non-Indigenous men became a national voice for Native American womxn. Holding back tears, Parker says “My question for Congress was and has always been: why did you not protect me or my family? Why is my life and the life of so many other Native American women less important?”. Slightly under one year after Parker’s momentous speech, on March 7th, 2013, President Obama signed the 2013 reauthorization of the Violence Against Womxn Act into law. The new bill led to the implementation of Special Domestic Violence Criminal Jurisdiction divisions in many tribal governments across the nation.  The passage of this bill is a significant political victory for Parker, Indigenous womxn, and survivors of sexual assault.