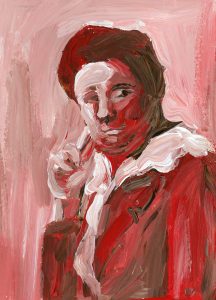 Physician, lesbian, feminist, activist, and anarchist at the turn of the 20th century: Born in New Bedford, Massachusetts in 1872, Marie Equi was one of eleven children born to first-generation immigrants John and Sarah Equi. Her sense of social justice traces back to the oppression her Italian father and Irish mother faced as working-class laborers, beginning when she learned about factory work conditions from her father and striking mill workers. She later experienced this exploitation herself at a textile mill after dropping out of highschool, forced to work long hours in horrendous conditions for starvation wages. The respiratory problems she accrued there, along with the deaths of three siblings to infectious diseases, motivated her to address the need for medical care for working-class families.

Equi escaped to the West coast in 1892 with her partner, Bessie Holcomb, and self-studied her way into a California medical school.  She became one of the first womxn physicians in the Pacific Northwest after licensing in Oregon in 1905 and spent the next decade providing healthcare and abortions regardless of her patients’ financial status.

Equi was politically active throughout her medical career and worked multiple campaigns to help secure Oregon’s victory for womxn suffrage in 1912. The following year, Equi visited a strike of womxn cannery workers in Portland and was clubbed by an officer while picketing; outraged at the police brutality, she declared herself a Radical Socialist and anarchist. Equi became an influential figure during the unemployment crisis that followed, marching with jobless men so often the media referred to them as her army. She was arrested in 1916 and found guilty of circulating illegal contraception information alongside fellow birth control advocate Margaret Sanger. Facing no fees or jail time, Equi quickly resumed her work.

Equi soon protested the U.S. entry into World War I, objecting to the war preparedness campaigns and calling on local men to not enlist. The U.S. government charged and convicted her of sedition when she refused to stop, sentencing her to three years in San Quentin State Prison in 1918. Although Equi was released after 10 months for good behavior, her return to the public sphere proved unfavorable for activism work. As the onset of the Red Scare propagated fears of unionists and radicals, most of Equi’s fellow activists were either imprisoned or facing heavy protest restrictions. She returned to medical work.

Fifteen years after her conviction, Equi was pardoned in 1933 by President Franklin D. Roosevelt. She resumed supporting workers strikes, with her daughter Mary caring for her in Oregon as her health declined. Marie Equi died in 1952 and was buried in Portland at the age of 80. She left behind a radical legacy of tenacity and determination, breaking boundaries in all facets of life as she fought for labor rights, womxn suffrage, and reproductive freedom. Through her grim childhood she cultivated tenacity and compassion, allowing her to enrich the lives of womxn, children, and workers of the Pacific Northwest.