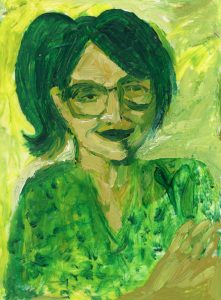 Kathleen Hanna began her feminism early on, erupting as a fiery force through her studies of photography at Evergreen State college, in Olympia, Washington, displaying feminist issues, as her first form of activism. The college’s lack of womxn’s studies at the time led Hanna to portray sexism through photography, but unfortunately, administration censored the imperative work she was doing. This furthered her determination and yearning for a platform to express the injustices womxn endured, leading to her creation of Reko Muse, an art gallery that exhibited messages of feminism. The bands Amy Carter and Viva Knievel formed, but it wasn’t until 1990 she became the lead singer of Bikini Kill, which was groundbreaking to the feminist movement and to young womxn all around the world.

Hanna, the embodiment of a raw and surreal womxn, living in the 90s, acted as a catalyst for the Riot Grrrl movement, through her punk rock lyrics and band performances with Bikini Kill. Flaunting “SLUT” across her midriff and wearing socially unacceptable clothing, she conveyed the anger womxn felt towards patriarchy, while continuing her relentlessness for a voice in society. “Girls to the front, men to the back” became her dominant force in providing a safe space for womxn, where they were free to enjoy themselves without harassment.

Jigsaw, a fanzine by Bikini Kill’s drummer, Tobi Vail, coined the term “grrrl,” which later was incorporated into Bikini Kill and Riot Grrrl zines. The “Riot Grrrl Manifesto,” was formed and it encouraged womxn to seize control of their lives and rebel against social norms, similarly to the messages of Bikini Kill’s songs.

Moving to Washington, D.C. in 1992, Bikini Kill continued to meet with other womxn, writing zines and discussing fundamental issues surrounding the betterment of society. After Bikini Kill broke up in 1998, Hanna worked on a solo record under the pseudonym Julie Ruin, which later became her new band in 2010, The Julie Ruin. Before that, in 1998, Hanna created another band, Le Tigre, based in New York, that emerged with a fresh form of sophistication and maturity, using electronic rock as their musical representation, to depict powerful messages.

In 2005, Hanna’s health declined tremendously, giving her no choice but to leave the band. She explained to her bandmates and fans that she had nothing more to share with the world, as a means of taking control of her situation, despite it being untrue. The lack of a formal diagnosis for six years took a toll on her health and eventually, she created another band to continue her empowering messages of feminism because there was still work to do. In 2010, Hanna was finally diagnosed with Lyme Disease and got her health in order, allowing for The Julie Ruin band to form. In 2013, The Punk Singer, a documentary on Hanna’s life, was published and received much attention for her work as a feminist icon. Today, Hanna continues to perform and spread her messages on the need for female equality, consistently contributing to society.