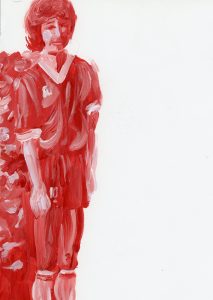 In the summer of 1985, an outstanding female athlete named Sharon McMurtry would be named the U.S. Soccer Female Athlete of the Year. To explain, this was the first U.S. Soccer Female Athlete of the Year award ever given, marking a big leap forward for womxn athlete recognition.The significance does not lie in McMurtry earning this award but rather it’s meaning for all womxn athletes.

The 1960’s proved to be a very unaccepting time for womxn athletes, however this would not stop Sharon McMurtry from making herself as active as possible. Since McMurtry was a child she was challenging the social boundaries of female athleticism. When McMurtry grew up, there was little opportunity for womxn to play competitive soccer. When she was only 15 years old she became the first and only girl to join the boys Inglemoor Soccer Team. In an interview with Seattle Times, McMurtry stated,“‘I played volleyball in the fall and basketball in the winter,’ McMurtry said in explaining her decision to join the soccer team, ‘and I hate going home, where there’s nothing better to do than eat. I like to be active.’” (Pentz). Her athleticism did not end with her high school career. When McMurtry entered college in 1979, the National Collegiate Athletic Association (NCAA) did not sponsor a female soccer program (U.S. WNT Flashback – 20th Anniversary). McMurtry turned to basketball and joined the Seattle University Womxn’s Basketball Team. From there, she was quickly recruited to play for a semi-professional womxn’s basketball team in Holland. After a year, McMurtry returned to Seattle in 1981 she immediately joined the womxn’s soccer club of the Tacoma Cozars. With her new club, she won the National Womxn Open Cup title that was considered to be the pinnacle of womxn’s soccer during the 1980’s. From the years of 1981-1983, McMurtry’s consecutively won the title (Pentz). Then, McMurtry would join the first United States Womxn’s National Team in 1985. It was the same year that she would earn the first U.S. Soccer Female Athlete of the Year Award.

Although McMurtry only played for the USWNT for a few years, she would leave an everlasting impression on female athletes everywhere. Current University of Washington Womxn’s Soccer coach Amy Griffin spoke on McMurtry’s influence in womxn’s soccer, ““There’s no excuse for me now. ‘Oh, I can’t do a rainbow,’ or, ‘I can’t beat somebody one-v-one.’ Shoot, I don’t have an excuse anymore, because it can be done’” (Pentz). McMurtry was one of the most important womxn in the social movement towards the recognition and validation of womxn athletes.