Our artifact is a winnowing tray, bilao in Tagalog, from the Abra Province in the northern region of Luzon, in the Philippines. It is a woven fan-shaped basket used for drying grains of rice and sifting them, particularly performed by women. 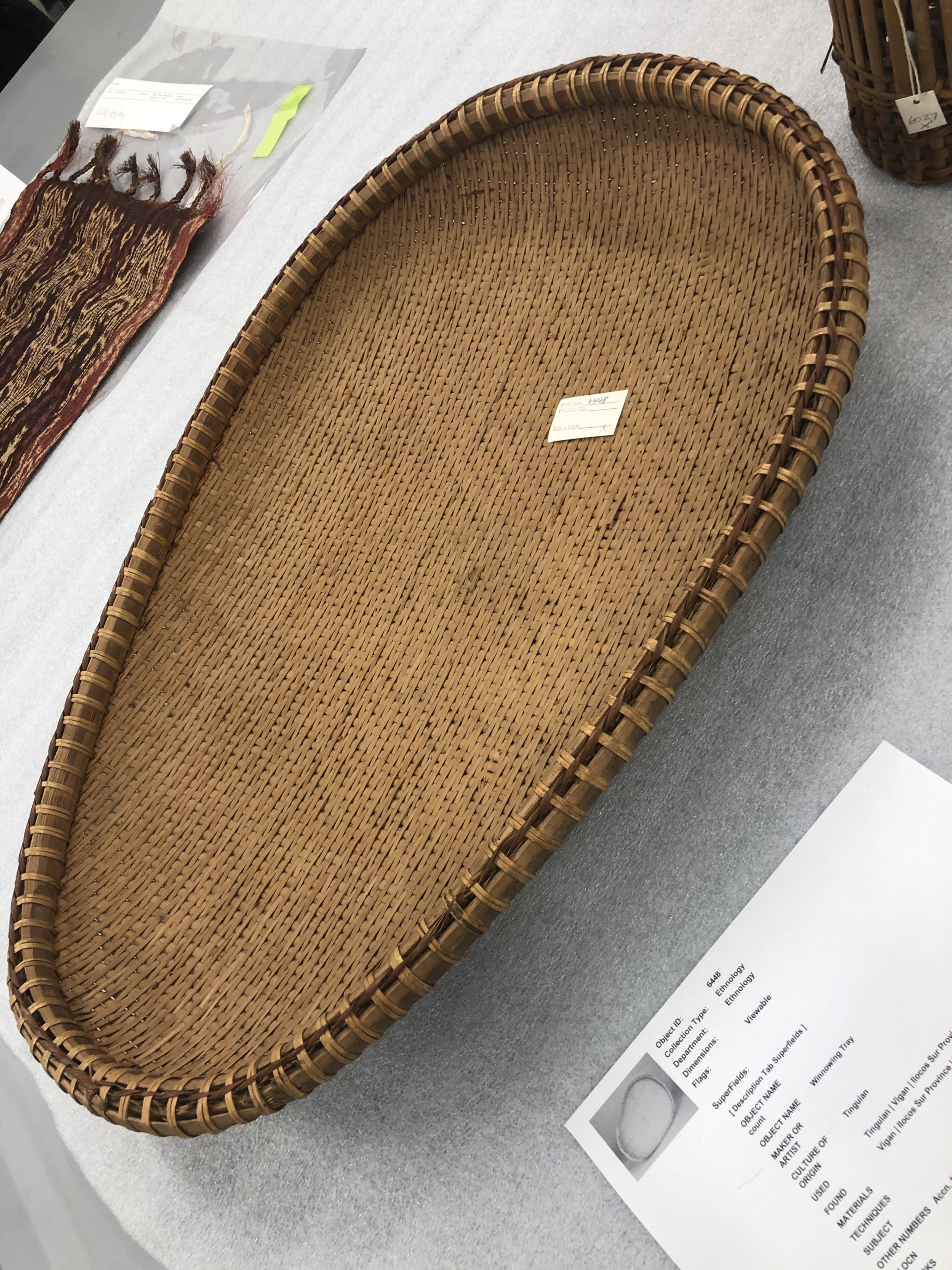 The winnowing tray is a fascinating artifact because of its resilience through years of colonization in the Philippines. It continues to be a fundamental tool that is used in everyday life. After the Philippines was “discovered” by Magellan in 1521, the islands were colonized by Spain and named Las Islas Filipinas after King Philip. The sultanates or indigenous people of the Philippines had several aspects of their lives destroyed and changed to assimilate into Spain’s rule for three centuries. When Spain sold the Philippines to the United States through the Treaty of Paris in 1946, the Filipinos went under U.S. colonization. After the Philippine-American War, Filipinos again were forced into assimilation by the United States through their education system and extraction of labor. Knowing the long-lasting effects of colonization and the trauma associated with it help people better understand the identity and history of Filipinos. Despite their history of colonization and assimilation, the winnowing tray or bilao did not leave or change its purpose in the lives of Filipinos. The winnowing tray, used to dry and sift through grains of rice, was a powerful weapon of survival during the years of colonization. Rice, a basic form of sustenance especially for poor people, kept Filipinos alive. The winnowing tray can be seen as a powerful tool that is essential to the identity of Filipinos because it has been passed down through generations of Filipinos who survived their colonization. Although Filipinos suffered through colonization, this tool is significant because it is still used today. It is a living sign of resilience.

Initially, my reaction to seeing this piece in the museum was that I was really surprised. Seeing the winnowing tray opened my eyes, from being something used daily to becoming an artifact at a museum. I would have never thought that an item like this would be something I have to analyze. But, I was also very pleased to see my culture being a topic of interest at the University of Washington’s Burke Museum community. Almost everyone’s experience with museums is walking into and not knowing a thing nor understanding the story behind each artifact. However, this time was very different from my other visits to the museum. It was almost a reflection and reminder of where my roots came from.

The story behind the winnowing tray is also a story of Filipinxs across the world. Generally, the purpose of this object entails a long process of cleaning and separating of hand-picked rice. Not everyone grew up with a rice cooker, and a winnowing tray was the start of it all. The people who usually use this are those who live in poverty. A typical main dish for those who are poor is a meal that required rice and a simple entree of meat. Filipino culture views food as being a symbol of love, and the process and hardship behind each dish made by hand is very important to its people. Which is why praying for the food and the hands that made it before you eat has become almost everyone’s traditional practice. The winnowing tray then becomes a reminder of how beautiful rice plantations are and how grateful we are to even have them still around. So, seeing the artifact there in the museum provided a sense of comfort and familiarity that drew us to it.

One of my fondest memories of visiting the motherland is driving up to the province, to the house where my dad grew up, and seeing my Lolas (grandmothers) squatting down and using the winnowing tray to sort the rice. I remember gazing out into the rice field and witnessing my people working hard under the hot sun. This gem in my memory has a lot of cultural significance. I’ve seen many Americans today use this tray as modern-day decor far different from its original use. This artifact is special to communities and schools because it is a piece of memory for present-day people, a reminder of the hardships that our ancestors had to face. This contributes and influences us to find our cultural identity. Without it, few would get to ever learn about the difficult times many had to face to survive the rough experiences of colonization. 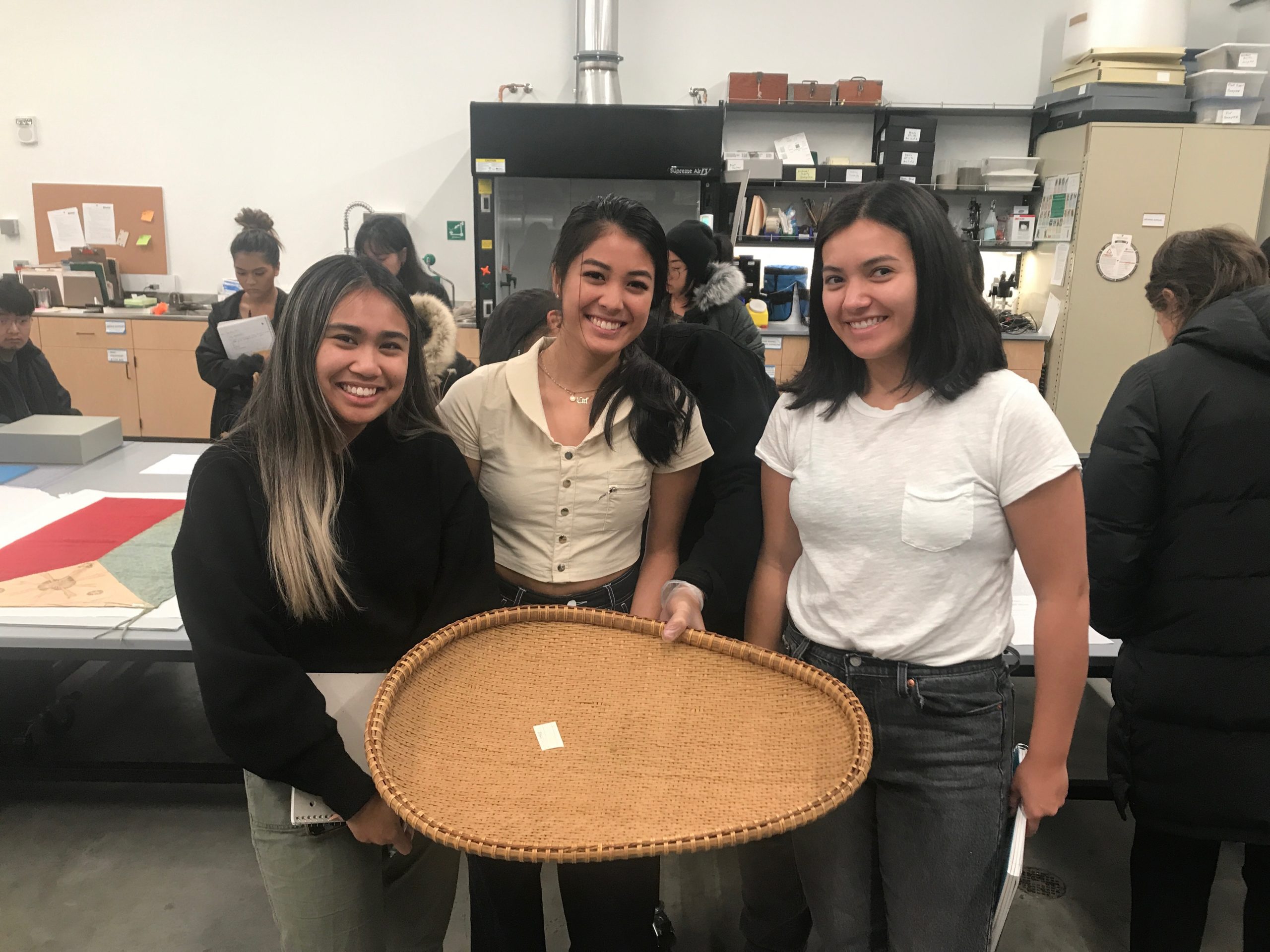