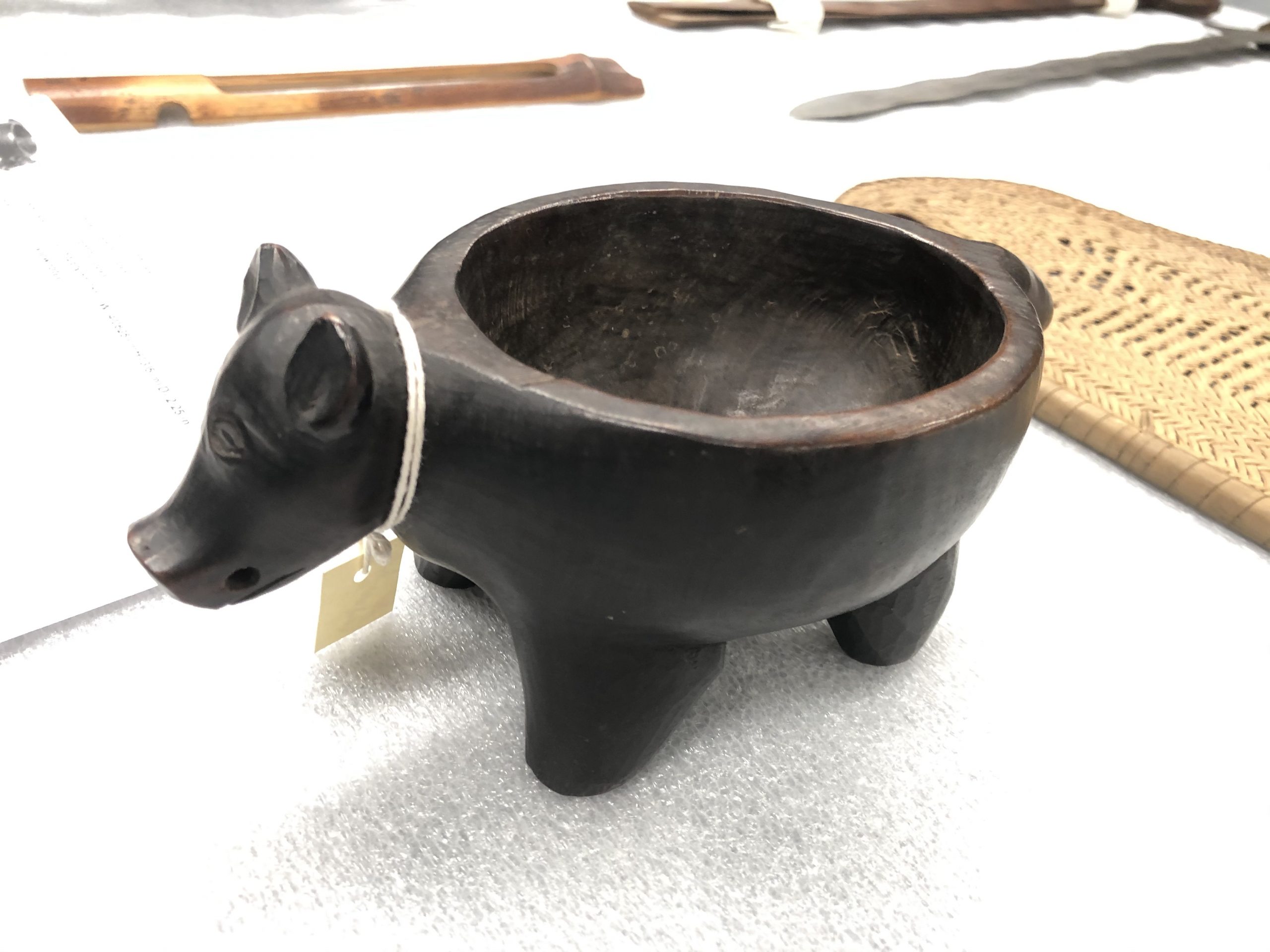 by Maychelle Manzano and Graciela Flores

Carved out of dark wood and smooth to the touch, this bowl looked just like any other. What made it distinct, however, were the four legs supporting its body, a head shown at the front, and a tail protruding out the back. It was an animal, though fairly indistinguishable at first. A cow, we had thought, taking into consideration its pointy ears and snout. We skimmed the brief description neatly placed next to the artifact and agreed that the bowl most resembled a boar. The thought of calling it the boar bowl undoubtedly crossed our minds. A satisfying alliteration.

Upon first sight, we immediately had many questions regarding this artifact: Who created this and why did they do it? What is the purpose or historical context behind it? What compelled Eugene H. Kolb, the donor, to buy and own it? Was it a form of art? Or a functional dish? Our professor even challenged us to think of it as a toy, considering its small size and child-like nature. Driven by curiosity, we were determined to find meaning in what we had found to be such a peculiar artifact.

Kolb himself had left only one note regarding the boar bowl. An “expression of humor,” it had said. We found this fitting at first, but after a minute or two of contemplation, we realized the flaws in our perceptions. Kolb might have deemed the bowl to be humorous, but that begged the question–Was humor the original intention of the creator? Could Kolb have been correct in saying the artifact was an “expression of humor?” What if he was wrong, and the object was one that held sentiment to the creator?  In analyzing how labels affected the first impressions of others, we realized that we were also guilty of allowing our judgment to be clouded by a description that is likely only indicative of one individual’s opinion on the artifact. With that in mind, we decided to purge all of our previous assumptions and critically examine what we were able to gather as fact.

The boar bowl is an artifact sorted under the dish category. It was made out of dark wood and tentatively determined to resemble a boar. It was donated to the Burke Museum in 1947 by a man named Eugene H. Kolb who, after the Philippine-American War, had bought the bowl in Luzon as a lieutenant for the U.S. Constabulary.

While this was all great information, almost every lead we had lamely reached a dead end. We believed, at first, that this would be a straight-forward research project. Only after searching online, visiting the library, and returning to the Burke Museum, did we learn that our efforts were to no avail. We resorted to hypothesizing the ideas as previously mentioned and, after many unsuccessful attempts, we had yet to assign a concrete meaning to the boar bowl. There was simply not enough information to accurately and effectively identify why this small and simple artifact was significant. We sat slumped against the stools, caught between the shelves of the Suzzallo Library’s “Filipino History” section. We were stumped and on the verge of giving up completely. There are plenty of words to describe how we felt. Confused. Helpless. And frustrated, more than anything.

It seemed like we had run out of options. Time passed, however, and during this period, a thought arose. These feelings of confusion, helplessness, and frustration–are they not what Filipino Americans today feel in terms of reclaiming their own identity? Steven De Castro, author of “Identity in Action: A Filipino American’s Perspective,” argues that Filipinxs, in pursuit of their true collective story, must do three things: search, discover, and reclaim. But there is a perceived barrier in the “discover” aspect of his argument when, institutionally, our knowledge and resources of Filipino history and culture have been limited to only that which has been cloaked to fit American ideals. This is where the boar bowl gains its meaning.

As mentioned before, we could only describe the boar bowl as a physical embodiment of all our unanswered theories and assumptions. Furthermore, we surmised that the lack of context and knowledge surrounding our artifact was likely due to the concealment and inadequacy of Filipino studies in American institutions. Institutional invisibility, a term coined by the Philippine historian and author, Reynaldo Ileto, recognizes that Filipino studies has been hidden for decades, ultimately contributing, in large part, to the insufficiency of information obtained about the artifact. Perhaps the research portion of our project proved more difficult than necessary because of the amount of information lost and suppressed throughout the century. The frustration we had felt in researching the artifact is likely a shared feeling between many others who are seeking the answer to what it really means to be Filipino and consequently, know its history and culture.

Despite the fact that the boar bowl is likely to be a product of institutional invisibility, Professor Bonus was able to alleviate some of our struggles in a one-on-one discussion with him where he provided us with a perspective that added a little hope to the artifact’s meaning.

According to the information given by the Burke Museum, the boar bowl’s origin lies in the mountainous regions of Luzon, the northern province of the Philippines. The North, as Bonus had stated, is known to have escaped most of the forces of colonization due to its difficult terrain. This brought up some interesting implications. Although the boar bowl is so seemingly insignificant and miniscule in size, it is astonishing that this simple dish managed to evade the destructive tendencies of colonization. This is what labels the boar bowl as a survivor. This bowl acts as an enabler in understanding how Filipinxs and those like them can find hope and resilience after enduring the perils of colonization and imperialism. There is something truly amazing about the lengths this artifact has traveled to reach the point it has and the culture that refuses to be forgotten through both time and space. It is thanks to this artifact’s existence that we are allowed, along with future others, the opportunity to pursue greater awareness and spark conversations about indigenous cultures that had previously been neglected and suppressed. Let the boar bowl be a symbol in continuing to strive for a more expansive education, one that gives back to the people whose voices have been stolen and one that remembers what has systematically been erased.