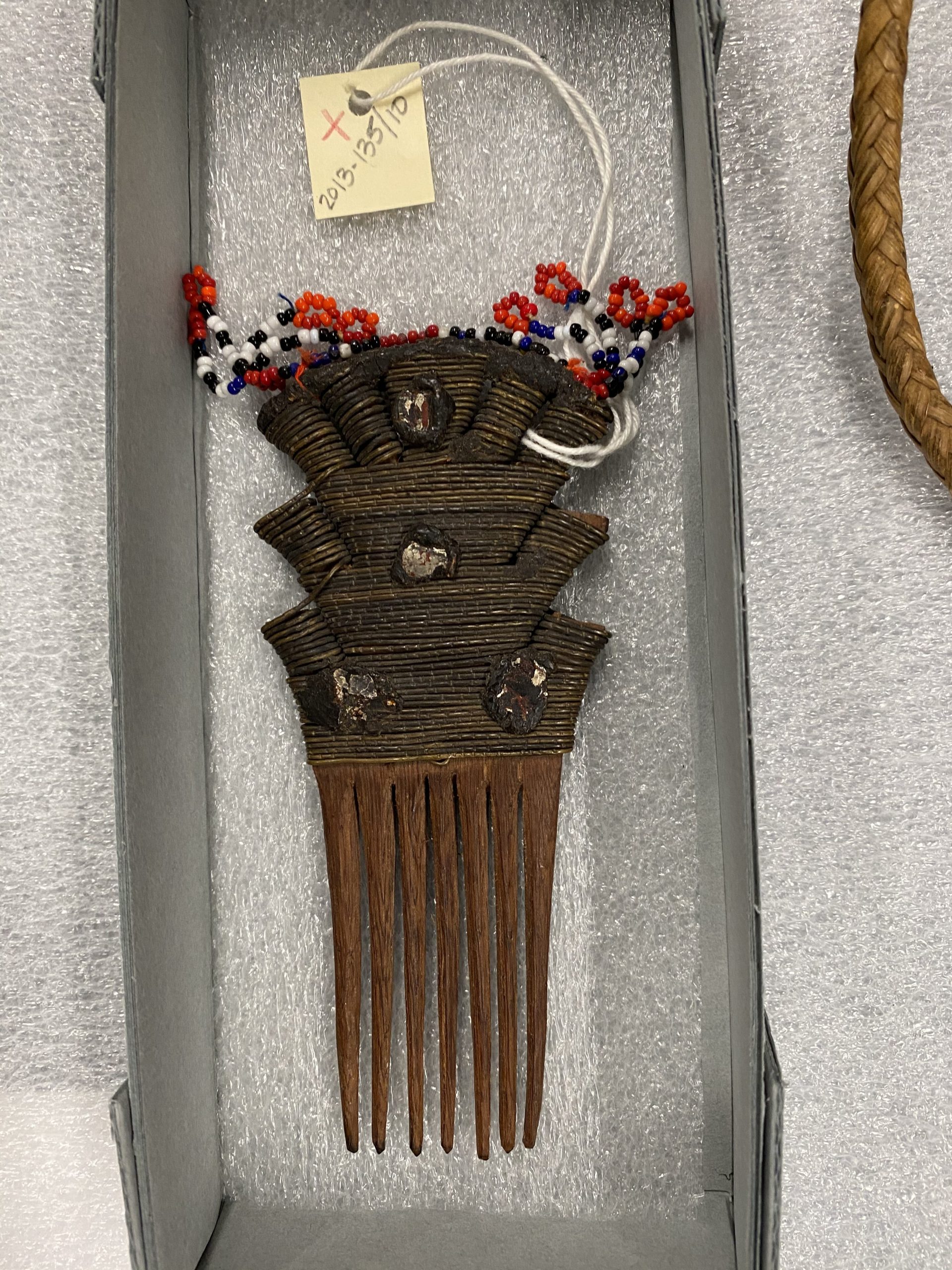 Combing through the Wreckage

Wandering around a table at the Burke Museum, we looked at the assorted artifacts scattered around, each with its own unique story to tell. We were searching for something available and extraordinarily special; the sword, possibly? No. Perhaps the flag from the Philippine American War? No either. How about the toy boat or the poison arrows? Unfortunately not. After some time, it appeared to us, this special, spectacular artifact that would tell an inspiring tale: the comb. While the comb drew little interest initially, there was a feeling that the comb could tell a valuable lesson and narrative, so we decided to take a chance on it.  The narratives that the comb voices should be given a platform, which is what this University of Washington Pressbook entry hopefully accomplishes.

It was small and unassuming, about five inches long and three inches wide. Made of wood, wrapped tightly on the top with a wire-like material, the comb, or possibly a headpiece, is surprisingly in good condition. Decorated with black, white, red, and blue beads, as well as metallic studs in the front, the craftsmanship stood out upon closer inspection. According to the information that the museum had, the comb appears to be from the T’boli tribe, who live in Mindanao, in the Southern part of the Philippines. It was gifted to the museum in 2013, and it is assumed to be obtained from the Philippines anywhere from 1972 to 1974, but could be much older than that.

Despite the brutal and long history of colonization and external influence from Spain, the United States of America and Japan, the comb appears to be wholly indigenous, without any influence from outside forces. While under colonization, objects, languages, religions and the ethnic composition of the indigenous population were drastically changed because of these outside forces. It was extremely hard for anything to remain original from the pre-colonization period. But the comb has. The prevalence of Spanish surnames and blood, Spanish Catholicism, and the popularity of speaking and writing in English due to American influence serve as evidence.

However, an equally important but less documented history is that of resistance in the Philippines and in Mindanao, specifically. Mindanao’s history diverged early on from the rest of the Philippines solely because of its location. It was in close proximity to Arab influences, which is why there is an influence of Islamic religions within the islands of Mindanao to this day. It was brought down to the South Cotabato and Lanao areas of the Philippines. When the Spaniards first arrived in the Philippines, their dominance was much more difficult to assert due to there being an already established semi-government in Mindanao. It was not until the middle of the 19th century that the Spaniards were able to break ground and establish sovereignty within Mindanao, thanks to their weapons. To this day, there is still resistance going on between Mindanao and the current official government based in Manila. President Rodrigo Duterte even declared martial law in Mindanao back in 2017 due to on-going security battles.

This comb symbolizes the obscured history of resistance in the Philippines: physical resistance to the destructive forces of conquest and resistance to artistic and cultural revision from outside forces. A comb here in the United States or in the West, for example, is distinct compared to the comb of the T’boli people. A comb here in the United States tends to be plastic or metal, plain, and mass produced, whereas this comb is wooden, decorated, and hand crafted. The fact that the indigenous comb has stayed true to itself in the face of an overbearing history of imperialism represents the idea of holding onto one’s tradition and culture.

The comb is a testament to resisting physical and artistic conquest: staying untainted and true to one’s self. Looking at the comb as something that travelled to America, surviving the history of colonization and remaining true to itself almost resembles a beacon for all people who feel pressured externally to change. The invaluable lesson that the comb has taught us and can teach everybody is that if the comb can make it, we all can make it.

Special thanks to Professor Rick Bonus for his insight and knowledge,

Rose Mathison for information on the artifact and the rest of the curators at the Burke Museum,

Lauren Ray, and the rest of the staff at the University of Washington, for their guidance.