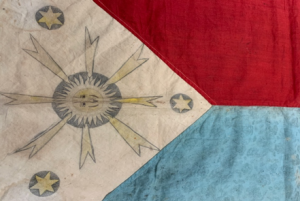 It’s on college campuses, in Instagram bio’s of proud Filipinos, hanging on the walls of hole-in-the-wall restaurants that smell like Lola’s cooking, and worn by people walking the city streets. The Philippine flag isn’t shy to make its appearance, and you don’t have to look too far to spot one. We see it in many different places. And for each individual, it can symbolize many different things. It’s a physical representation of pride and identity for many Filipinos. It holds a long and complex past of war, violence, and trauma, but also resilience and hope. The flag has stood witness to many events throughout the country’s history. From the proclamation of the Philippines’ “independence” to the years of bloody combat, the flag has been there through it all.

History of the Philippine Flag

At the end of the Philippine Revolution, Emilio Aguinaldo went into exile in Hong Kong and designed the Philippine flag to be what it looks like today. Every detail of the flag was carefully designed to hold meaning. The white triangle stands for equality; the blue stripe stands for peace, truth, and justice; and the red stripe represents patriotism and valor. The eight sun rays symbolize the first eight provinces in the Philippines that revolted against Spanish colonization. The three stars represent Luzon, Visayas, and Panay, the main islands of the Philippines during that time. Marcela de Agoncillo, her daughter Lorenza, and Josefina Herbosa de Natividad sewed the first flag out of silk. During the Spanish-American War, Aguinaldo returned to the Philippines with it. It was first flown in 1898 and has since been declared the national flag of the Philippines. 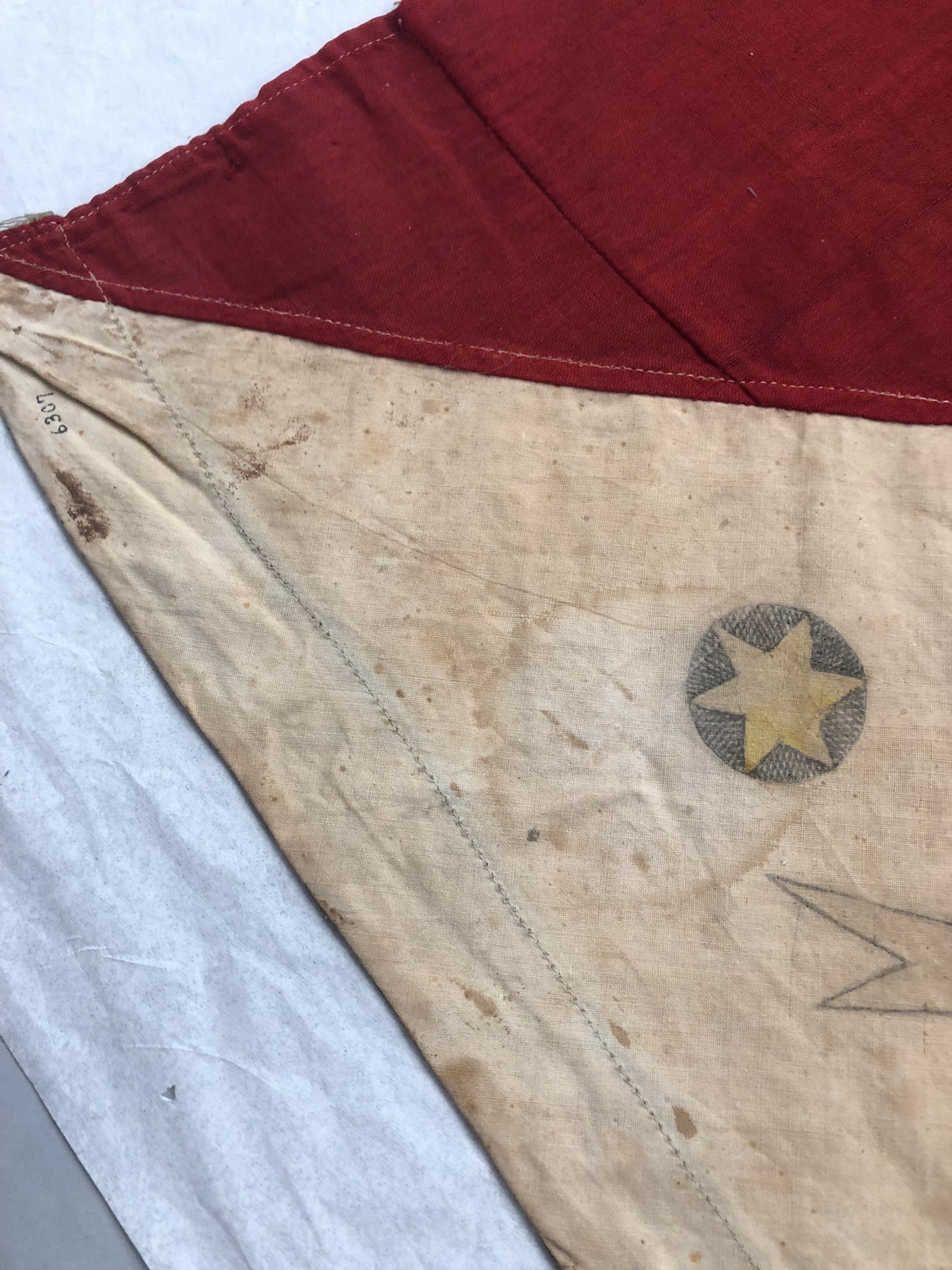 The specific flag we picked out at the Burke Museum is from the Laguna Province of Luzon in 1899. The flag is covered in blood stains and the red stripe is on top, which means that the country was at war during this time. This flag is significant because it is a symbol of the resilience of the Philippines and its people. Despite the blood, aging, and wear it has endured, it is still relatively intact. Like the flag, Filipinos have been through hundreds of years of colonization, imperialism, violence, and trauma, but we’re still here.

We were interested in this artifact because although we see thousands of different flags in the world every day, it is incredible to think that we’ve never seen this specific flag before. The number of stories it could tell if it could talk would be endless. Even though we have no clue how the flag made it to the U.S., nor do we know how the blood-stained battle scars came to be on the faint blue fabric, we chose this artifact because we wanted to tell a meaningful story of its past. 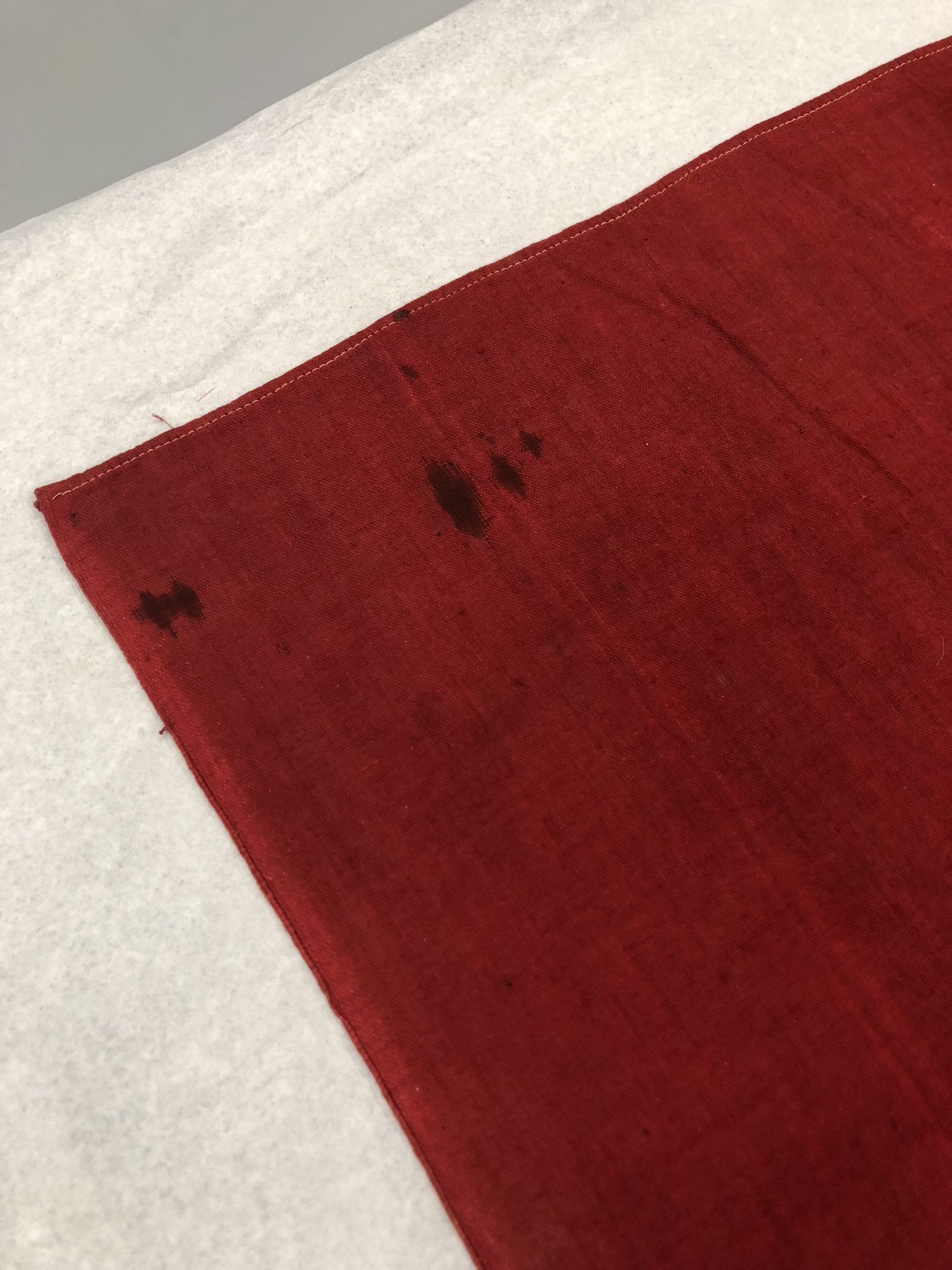 “Resistance in Paradise” outlined how the conquest of the Philippines was not a small event. The Philippines faced years of colonization, starting from when Ferdinand Magellan sailed to the islands in 1521. The Philippines remained under Spanish rule until when the Treaty of Paris was signed in 1898, which kick-started U.S. colonization. As colonization brought imperialism, trauma, and violence to the nation and its people, this flag stood as a symbol of the resilience of the Filipino people and the hope for their liberation across the nation.

This flag knows that imperialism and colonization don’t go away after independence. This flag has seen resilient and proud Filipinos come together in solidarity to listen to songs like Bayan Ko to remind themselves that they are and have always been resilient, and to keep fighting against systems that are against them no matter if these people reside in the homeland or abroad.

Connection to Community and Self

In Filipino history, this flag represents hardships, growth, and a country’s pride as a physical embodiment. As we grow, we look to the flag in remembrance of all those events and as a symbol of hope for a better future. When healing in the communities and the search, discover, reclaim tactic started, the flag was a warm symbol of a homely feeling and a sense of comfort. It encouraged people of the community to come together as one and to move forward as a single unit. Throughout history, the flag was always present, even if not physically embodied yet, like during the Spanish colonization. The flag has always lived in Filipinos themselves, giving it life even before it was created. This shows the power residing within Filipinos as they continued to fight on and push through all the adversities, concentrating on that flag of freedom.

The project provides a space for students to learn about their cultures through items their ancestors used. We can research any object to learn the histories and where it came from, but when it comes from your own culture, it adds another special dimension. Knowing that the item was used by your ancestors in the past during times of colonization gives people a personal connection to the item. The artifacts are connections to the past, so the future may know what life was like back then, and having the chance to do so was enlightening. We learned about the creation of the national flag and how meaningful it was to the Filipino people, especially in times of colonization and growth. We hope people can learn the ways that Filipinos used to live and the tools they used in order to get through all of their difficult histories and become the proud people they are today. 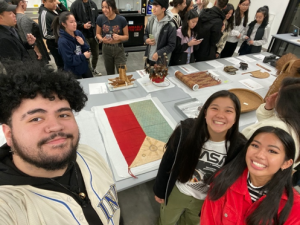 We would like to thank Kathy Dougherty, Rose Mathison, Professor Holly Barker, Lauren Ray, Harry Murphy, Maryam Fakouri, and last but not least, Professor Rick Bonus for giving us the opportunity to do this project. Salamat!