A special thanks to the Burke Museum for allowing us to visit. 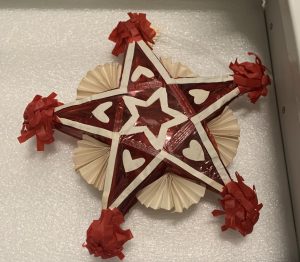 Supposedly acquired in 2013, this parol was originally on display as a Philippine artifact at the old Burke Museum. Shown next to Santo Niño figurines, these artifacts and other Catholic iconography were considered representative of a single thread of Filipino history: Spanish colonization and its influence. When the new Burke was built, the museum curators received feedback from Filipino community members, and decided to put the parol and other Catholic-centered artifacts back into the collections. Thus, the opportunity arose to show a different strand of Filipino history. Instead of a single monolithic story of conquest, the Burke can now present the Philippines as having a rich cultural nexus with a history that began before the arrival of Magellan.

The role of the parol is complicated. But its genealogy is quite simple; its name is a derivative of the Spanish farol, for lantern. It was an ornament lent from Spanish traditions that were celebrated and expanded under Spanish law on Philippine soil. The ornamental lantern symbolizes the star of Bethlehem, and is hung outside or from windows. Pragmatically, the parol lit the way to church during the Christmas season for the early dawn masses, Simbang Gabi, leading up to the midnight mass on Christmas Eve, also called Misa de Gallo. The parol is not only an embodiment of the glowing guide for the three wise men, but also, perhaps more notably, a singular expression of the Filipino Christmas spirit. While Catholicism dominates the Philippines, and while its symbols are thoroughly loved by the populace, it is imperative to be critical of the systems that laid the ground for its pervasiveness.

So, what does a parol mean to an American-born Filipino? Divorced from the lantern’s ubiquitous presence in the motherland, where does its light lead? Our co-author, Thomas Macale Abalahin, states, “I understand the criticism of singular narratives, but parols… feel so… Filipino.” Abalahin extrapolates that the parol remains Filipino in character because it has been elevated as a tradition in Filipino culture; the materials, skills, and love put into each parol feel uniquely Filipino, even if they originate from practices elsewhere. From his personal experiences, the parol makes itself apparent as a long-lasting connection to his family’s Filipino identity. When speaking to what the parol means, Abalahin says “even if my mom says we are American now… we still have the parol, and I thought it was just a regular Christmas thing growing up until I saw no one else had one.” Specifically, the parol was ordered by the co-author’s late grandmother from the Philippines; and the province his family hails from, Pampanga, has even taken the title of “Parol Capital of the Philippines.” He connects the parol with faith, his grandmother’s and mother’s faith, and an admiration for its craftsmanship recognizable even from across the Pacific Ocean.

In practice, Abalahin marks this connection as a form of transnationalism — that his grandmother could not let go of a cherished tradition, and so ensured the parol’s arrival and preservation on American soil in spite of their apparent loyalty to their new nation. Just as she sent balikbayan boxes (boxes of dry goods) back to the Philippines, his grandmother also received gifts and trinkets from her family in the provinces and enjoyed these small parcels sent from home. This exchange also represents a site of contradiction: pride in the Philippines and its goods, and the claim to the United States as their home. If the U.S. is home now for the Abalahins, why take bits and pieces from the old home and declare them as better made, as unlike anything in America, or as more auspicious? For the Abalahin family, American citizenship meant partaking in the belly of the empire; a higher quality of life afforded by the accumulation of wealth in the imperial nation that drew them in. They coveted the light of empire, while renouncing their previous allegiances as an effort to draw themselves closer to that light.

From the perspective of a non-Filipinx, the parol seems to symbolize light over darkness. Although this history of the Philippines is wistful, the parol unites a community through hope and resilience. Much like the three wise men, the parol guides them to something greater than their own. The simplicity and uniqueness of this specific parol bring a sense of life, as it feels very homemade and personal. One may even question why this parol is in the Burke Museum. Why is this delicate little artifact here? After speaking with the museum’s collections manager, Kathy Dougherty, she said most artifacts were previously donated. Knowing who or why someone donated this parol might remain a mystery. However, one may wonder about its marvelous journey to the Burke and begin to imagine a story of their own creation. The heart-shaped patterns on the parol evoke a sense of warmth and love put into its making. And by being at the Burke Museum, hopefully (if the museum plans on showing the parol in an exhibit) it would showcase the journey of love and light expressed by the Filipino community.

The parol has many roles and meanings, shifting and overlapping across different times and places, simultaneously dependent on context as well as the person one asks.  It seems not dissimilar from the histories and identities of people who identify as Filipinx, as we moved from the role of the parol within the influence of Spanish colonization, to the meanings of the parol from outside of the Philippines.  The parol looked small and unremarkable, sitting within Burke’s massive natural history collection, but it turned out to be an artifact that sparked a lot of earnest discussion among us.

Out of all the answers for the role of the parol, we have a favorite.  Ernesto David Quiwa, a parol-maker dubbed the “Golden Man of Parol – San Fernando,” believes that:

“the meaning of lanterns is to give love.”