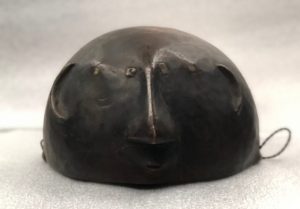 These people are preeminently mountaineers. They prefer the high, cold, and semi-arid crests and valleys of the loftiest ranges…these people live in compact, well-built villages, frequently of several hundred houses. (Barrows, pg. 9, 10)

The helmet, or oklop, is carved out of wood. Although many groups in Northern Luzon wear oklops, the Ifugao are the only ones who carve faces on them. The typical features are a large triangular nose, close-set eyes, and protruding ears. A string is passed between each ear to secure the oklop to the head. During hunting or traveling, warriors would also use their oklops as a bowl for eating and drinking.

The oklop was crafted sometime in the 19th and early 20th century. This was a pivotal time in Philippines’ history. During that time, the Philippines was in a constant state of war – either revolting against the Spanish Empire, or fighting off American colonization. The Ifugao people likely used their oklops to protect themselves in combat.

When the U.S. helped the Philippines defeat Spain, rather than liberate the country, they purchased it from Spain for $20 million. After the Philippine-American war, the Philippines experienced a decade of American government (1903 – 1913). Soon after, the Jones Law was enacted in 1916, creating the first fully elected Philippine legislature. This led to the modernization of the Philippines, as well as the antiquation of the oklop.

As a piece dated from the early 1910s, it is necessary to put the oklop in the context of the times, or more specifically, in the context of the Philippine-American war. This war, itself the product of multiple layers of colonization of the Philippines (first by the Spanish, then by the Americans), is a direct reminder of the long-lasting legacies of resistance and resiliency found within the Philippines and within the Filipino diaspora. This helmet ties directly into these ideas as a piece that subverts many of the traditional tropes and images mapped onto the indigenous communities of the Philippines during this conflict, such as strife, helplessness, or disobedience. Take, for example, the many faces carved into the many different helmets found within the Burke Museum’s Filipino collections. These faces serve as a direct contradiction against the idea of helmets being used to camouflage, conceal, and protect the people underneath them. On the contrary, these faces are a breath of life and light-hearted humor even in times of war and conflict. Additionally, these helmets that double as bowls yet again contradict the images of war and struggle that are often connected to indigenous communities within the Philippines. Instead, we can replace these images with ideas of nourishment and camaraderie. Together, these two aspects create the image of a strategic, but still humorous, product of the conflicts, from a group of colonial resistors with their own power, ideas, and autonomy, things that are often forgotten when discussing conflicts. All in all, this helmet, one of many found within the Burke’s collections – all with their own faces, characteristics, and histories – is a great reminder of the strength and resiliency borne out of the diversity of the Philippines and the Filipino diasporic communities, as explored in Napoleon Lustre’s poem, “Conditions (an unrestricted list).”

The opportunity to engage with the oklop, as well as the rest of the artifacts gathered for research within this project as a whole, has been an interesting activity for us scholars within Filipinx Studies. In a sense, this artifact project has been an exercise in countering the invisibility of Filipinx histories both within the classroom, and for the sake of this project, within a large body of public knowledge, represented in the Burke Museum. In our research, questions regarding not only the history of the artifact in a traditional sense but questions of the history of travel and inheritance the artifact experienced to come into the possession of the Burke arose, a topic not entirely unraveled within the information provided by the museum. In exploring this matter, the complex and intertwined history of colonialism and museum inheritance came to the forefront, providing an interesting take on the ethics of artifacts and museums, adding to conversations regarding Filipinx American histories. Unearthing the histories of these artifacts through research directed by an awareness of the erasure that has afflicted Filipinx Studies in the past has allowed us to subvert the work of past gatekeepers of knowledge and contribute a holistic history of the artifacts. Rather than breathe new life into the artifacts, we have allowed the artifacts to breathe again, making them speak rather than speaking for them.