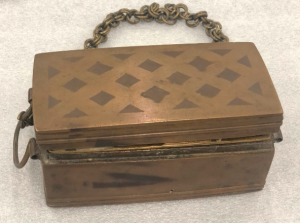 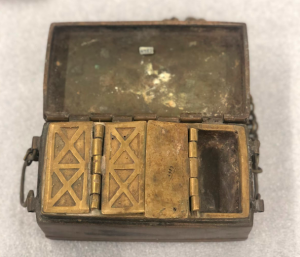 Our artifact is the betel box. This a storage container for betel nuts and other ingredients that were used in betel nut chewing, like slaked lime and betel leaves. As mentioned, betel nut is chewed and wrapped in leaves so that its taste gets to be more pleasant. The box itself is made out of brass and is of dark chestnut color. It has an intricate lacing design, which is typical of Islamic architecture. Since this box was created during the pre-colonial or colonial Philippines, it was hand-made! Inside the box, there are little compartments for storing other products used in betel nut consumption. The box itself is still in good condition, even though the Burke museum guides theorize that this box is well over a 100 years old.

Where is it today?

The object itself is stored in the Burke museum warehouse near the University of Washington. It is not on public display because of limited space, but it is available to be viewed under a special request. Upon inquiry, we learned that it was purchased in 1910 from a Mrs. J.M.T Partello in the Philippines.

What is Betel Nut?

Betel nut is the nut of an Areca palm tree that is a mind-altering substance. It has similar effects on the brain as tobacco and weed, but if taken in high doses, it can act like cocaine. It is an addictive narcotic that is used mostly by women and children. It is estimated that as much as 10% of the world’s population chews betel nut, but this number is on the decline. Betel nut causes health risks like oral cancer and permanent tooth discoloration, so it has been on the road for illegalization in many Asian countries.

This box has survived the colonization of the Spanish, Japanese, and American people, meaning that much of the information surrounding the box has been lost. We do not know where in Mindanao this box was found, nor do we know the relationship that a community had with it and its contents. However, the mere fact that the box has survived this long without having been destroyed is a testament to the notion of resilience against the longstanding history of colonization.

During Spanish colonization, betel nut, among other goods like tobacco, were taken and sold through the galleon trade. This demonstrates how the colonizers used the resources from territories under their control for financial gain. Betel nut is local to Southeast Asia, so it was likely not seen by the Spanish before they colonized the Philippine islands. This illustrates the willingness to exploit indigenous cultures and traditions for ones’ own benefit. Also, Steven De Castro, a Filipino American author, states that we must “search, discover, and reclaim” our identity. Though this box shows a long and brutal history of colonization for the Filipino nation, we can use this history to teach others about the resistance needed to combat the forces of colonialism.

Much like the recreational use of weed, betel nut can be seen as a similar substance in terms of affect and stigma. However, unlike weed, betel nut is not as intensely regulated and is still legal in many countries. This may be because the use of betel nut has been mostly replaced with tobacco and is not a substance commonly seen today.

Much like people use tobacco, betel nut is used as a way to de-stress. The effects of nicotine and betel nut are very similar in the fact that they both can calm the body. They give a “high” that causes euphoric feelings in the body, which takes the mind off the aches from work and other anxieties. We can see that no matter where you are, the desire to find a substance to use for de-stressing is universal.

Due to the fact that there is very little information about this artifact, we would like to speculate a bit about it. Looking at the box, we notice a simple design on the top of the box and an imprinted pattern in the interior lids. From this, we can see that it was made from rich materials and done with quality craftsmanship. We can thus assume that it was used to store something of value. Much like a jewelry box carries valuable items, we can conclude that betel nut was of importance and value due to the box it was stored in. 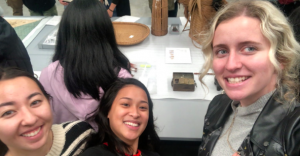