The artifact we’ve chosen is a headdress donated by the James S. and Ann E. Boynton family in 1988. It originates from the Ifugao people who reside in a mountain province of Luzon, which is located in the northern part of the Philippines. This particular headdress is adorned with feathers and attached to it is the beak of the Kalaw (hornbill) bird. It is usually worn by a religious Shaman. However, in our research of this artifact, we learned that it can be used in a variety of ways, such as being worn during wedding ceremonies by the bride or by the village chief as a crown during planting and harvesting rituals. Women tend to be in charge of weaving the band of the headdress while men collect the beak or carve a wooden figure of Bul-ul (the God of rice) that sits atop the headdress. This artifact is significant because it existed during the pre-colonial time of the Philippines and has lived through Spanish and other colonizations. 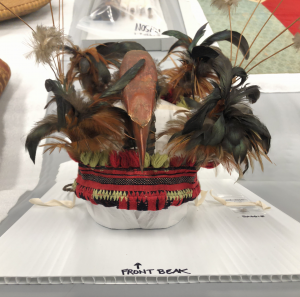 The overall intricacy of the artifact and its beauty are what intrigued us. From the colors, to the inclusion of feathers, to the beak of the Kalaw situated at the top, the artifact is beautiful and we were astounded by the fact that something that seems so delicate has managed to last through the centuries. This artifact is a remnant of the past; it survived Spanish colonization, conveying the idea that this part of Filipino shamanism is not subject to erasure even through the spread of Spanish Catholicism.

We can see that this artifact obtains its significance through its representation as a status symbol of respect and authority; a deeper analysis of this artifact leads us to realize that there is a much more complex rendition of civilization in the Philippines in pre-colonial times, which contradicts the typical assumption that Filipinos only became civilized during and after colonization. This indigenous artifact is also significant because it is a symbol of resilience as it escaped eradication and happens to be physically here with us today.

To look at this artifact through a critical lens, however, it seems that although this artifact provides information about the customs and traditional clothing of indigenous Filipino people, it partakes in creating the façade that “cultural gatekeepers” render to not draw attention to the historical context of colonization and suffering associated with the people of the Philippines. This artifact is not obviously linked to the idea of empire in the eyes of most audiences, which contributes to the lack of understanding of “friendship and forgetting” and institutional invisibility. Without understanding this historical context, we cannot fully understand the artifact.

That being said, this artifact can also be examined methodically in the context of the argument Lustre illustrates in their poem that this item belongs to all observers who are of Filipino descent, regardless of their overlapping, conflicting identities or how strong their connection is to their origins. As a result of diaspora and a long history of conquest, many Filipinos have not seen the mainland and have grown disconnected from the Philippines. This artifact should serve as a source of strength and pride for all Filipinos. It is a physical representation that certain identities have outlasted about 400 years of colonization and suffering.

As part of the Filipinx-American community, we find it difficult to truly define our identities as we are a result of centuries of colonization. This artifact serves its part in starting a conversation of who we are and where we truly come from. It relates to our personal lives because, as an artifact with a Filipino background, it gives us a peek into our own histories being of Filipino descent. It serves as an object that represents distance in both time and space, so being able to learn more about its history and the region it comes from is something that should not be taken for granted. Though none of the members of our group are from the mountain provinces of Luzon, it is rewarding to learn more about the varying cultures and traditions even within the Philippines.

In relation to our school, the institutional practice of keeping museums can be utilized as a tool to acquire knowledge, especially if done ethically. We notice that there is an influx of Filipino students here at the University of Washington, so, by having the Burke museum provide and care for an abundance of artifacts with rich Filipino histories, Filipinx/Filipinx-Americans at this school are able to learn more about the different aspects of their culture for free, with trust in the transparency of the Burke. This artifact is of importance to Filipinos especially because it shows us how other Filipino people display their pride and honor their culture through traditional clothing. By observing and having this artifact on display, it encourages other Filipinos to find ways to educate others about their cultures.

Doing this Open Textbook Artifact Project has brought an opportunity to apply bayanihan—which is achieving a goal through a collective effort—to learn to connect Filipinx-American history with tangible objects from the past. As we collaborated together throughout this project, we learned more about the varying cultures of the Philippines and how to connect them to current times, thus improving our knowledge of Philippine history.

We ask you to take this time to reflect with us in engaging with this artifact. How can the acquisition of this headdress be viewed in a positive light? This artifact has served us to think deeper on what it represents, and we hope it has the same effect on you. 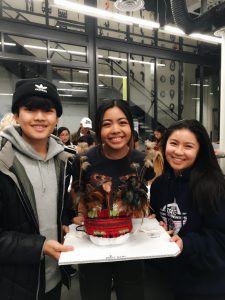 National Museum of the Philippines

Ritual Spirituality in the Philippine Cordillera