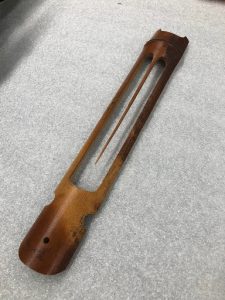 A special thanks to the Burke Museum

& the amazing staff for the experience.

A short clip of the Kubing being played

This artifact is the kubing, or mouth harp, and can be found in the Maguindanao province of the Philippines. It is played by both Muslim and non-Muslim tribes in the southern islands and in Indonesia. This particular artifact dates back to 1903. The definitive origins of the kubing are relatively unknown, but it can be traced to around the 18th century. The purpose of this instrument is for communicating between loved ones and family members. It is also used for courtship.  Historically, it was men who used this intimate instrument for those traditions.

Music as a reclamation of culture

Music is one of the most significant parts of culture. It defines an expression of self, outside of spoken language. Everyone can identify and relate to the emotions that a piece of music is trying to convey. A huge part of the study of music itself is ethnomusicology, or the anthropology of music. Ethnomusicology is dedicated to documenting the significantly close relationship between music and the larger culture from where it comes. Our group took interest in the kubing because we saw that it wasn’t just a single instrument, but a representation of the importance of music for Filipinx people. We wanted to explore this artifact as a form of De Castro’s suggestion of studying Filipinx and Filipinx American history: search, discover, reclaim. We want to take a look at the kubing and share our truth with you. The searching and discovering have arguably been done, but we must still consider how to reclaim this artifact. How do we make it ours again? How do we interpret it in light of our current culture? How can we take our findings and relate them to how we interact with others today?

Music as a reclamation of masculinity/femininity

Music, dance, and performance are extremely large parts of Filipino culture. So many shows on TFC (The Filipino Channel) are focused on or include someone singing or performing. Filipinos have been representing their culture through their singing voices. Lea Salonga was the singing voice of Princess Jasmine in Disney’s production of Aladdin, and the singing voice of Mulan. She was also in the Broadway production of Les Miserables. AJ Rafael dominated most of our playlists growing up with songs like “We Could Happen” and “Red Roses.” The significance of music in Filipinx American culture runs extremely deep and can be traced back to Taxi Dance Halls and Dancers in the 1920s and 1930s. In class, we learned about how Overseas Filipino Workers (OFW) would reclaim their lost masculinity through military service, writing, boxing, and most especially, dancing. The particular focus on dancing as an expression of masculinity spoke to us in a strange way. We thought that this idea was powerful, but not whole. We believe that dance, music, and performance don’t have to belong to a particular gender. We believe that the importance of music in Filipinx culture can be claimed by everyone. When we collectively look at this kubing, we want to look at it as a representation of music which, as discussed through ethnomusicology, is a major representation of culture. We know that Filipinx people value music to an extremely high degree through our look at Taxi Dance Halls as important sounds in places of community gathering, and we believe that the kubing is a larger representation of that value of music.

Connection to self and community

How do we use music when interacting with each other?

This artifact has a very strange connection to how we believe people interact and “court,” or flirt with each other. We noticed how the kubing is used as a form of courtship and thought that it related to how we see people share music and playlists as a form of flirting. It might not share the same idea of displaying skill, but more likely follows the line of finding common interests with another person.

How does this relate to Filipino American Studies?

A strange thing we noticed about our particular kubing is the general lack of information that was provided to us by the Burke Museum. We didn’t think this was necessarily a limitation because it gave us a lot of room to extrapolate on the meaning of the kubing in relation to the larger idea of music that was surrounding it. We thought that the lack of a specific history surrounding our artifact spoke to the idea that Filipinx American studies is a shifting field. Our interpretation of the meaning behind our kubing isn’t an absolute truth, but one of many truths that could exist around it. We also noticed that the Burke didn’t claim to know anything about the artifact itself. We thought this helped to exemplify the Burke’s mission to have their displays centered on the community finding itself in the museum. Seeing so many artifacts available to, and provided by, the community speaks to how powerful finding a collective truth is — not one that is absolute, but one that everyone can understand and follow clearly. In relation to the kubing, as an artifact, the overall lack of specific information adds to the idea of a collective truth. As an instrument, it acts as a tool for the creation, development, and collective definition of culture. 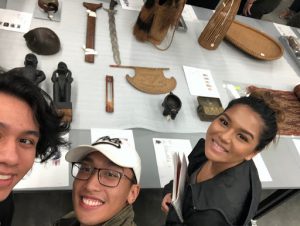