Stabbing the Narrative: The Mindanao Kris and Scabbard 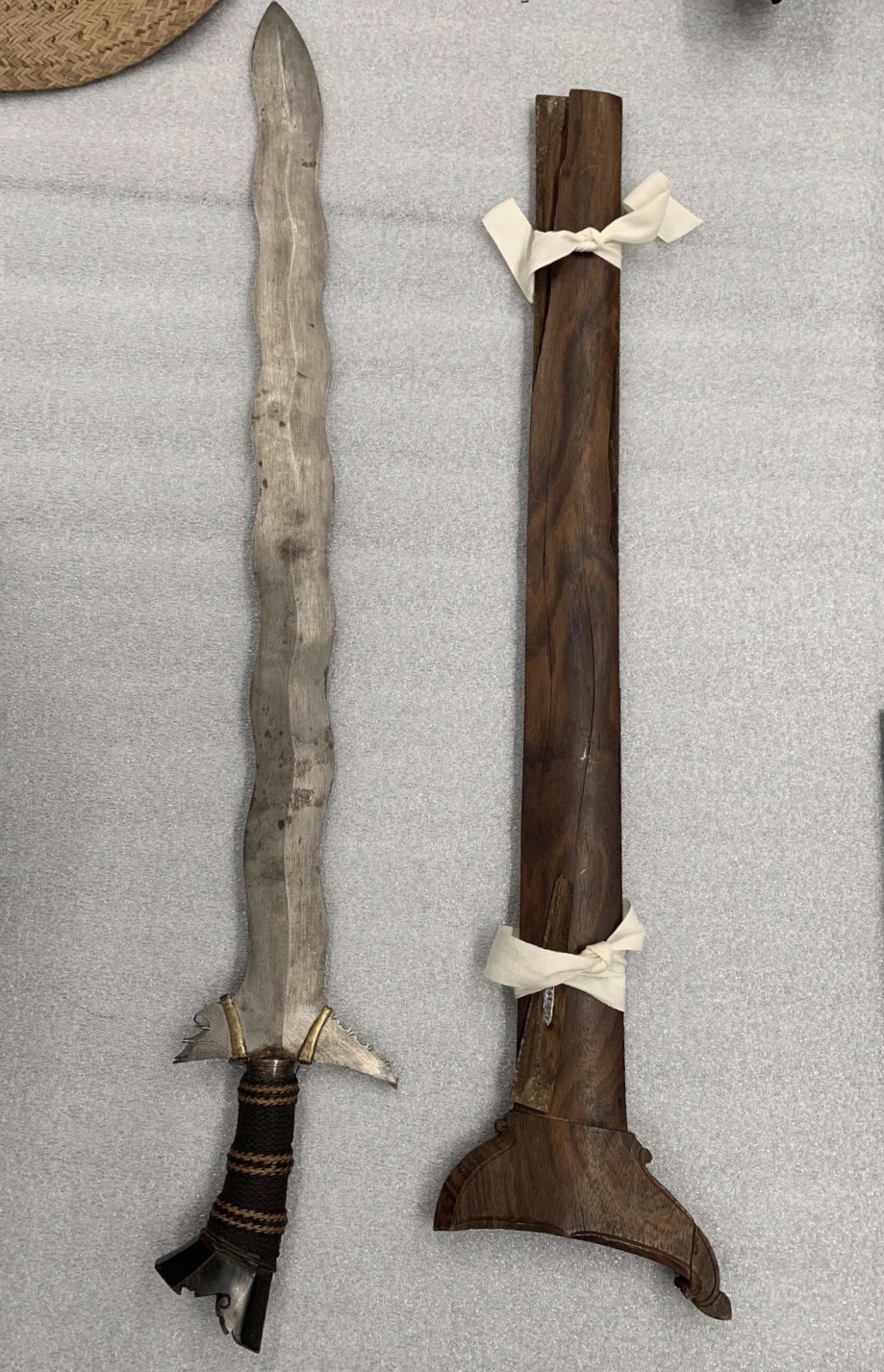 Donated by Vic Hurley as part of the Betty and Vic Hurley Asia Collection, the Mindanao Kris and Scabbard were first accessioned in 1978 at the Burke. The collector, Vic Hurley, had extensive knowledge of the Philippine islands as he resided in Mindanao for several years before moving to Zamboanga, where he served in the Philippine Constabulary. Both a ceremonial and combat heirloom, the kris is a 19th century sword that typically originates from Southeast Asia, and was first forged in Indonesia before traveling to the Philippine

islands. The curved blade is something that distinguishes the kris from any other weapon. Forged to be a stabbing sword, the waves maximize the width of the wound when used to impale the enemy, but it is also significant as a symbol of status, depending on the higher number of waves per side. Doubling as a spiritual heirloom passed down through successive generations, the kris is also believed to possess a good or bad spiritual presence, determined by an odd number of waves on one side of the sword. It is also evident that the curves are symbolic of a flame or serpent (depending on residency) and can signify to a traveler what land or region the yielder came from, as well as their position within their community. This specific kris and scabbard were dated around 1926-1936 from Mindanao, and it is evident that the guard of the kris blade was forged separately from the hilt – also called an antique kris (made prior to 1930). The specific detail lining the guard and the slight curve to the hilt can indicate its multipurpose use as both a combat sword and an heirloom. The curve on the handle ensures a more secure grip for battle. Its fine detail emphasizes the intricacy and time put into the artifact. A scabbard is a sheath meant to hold the blade of a sword, and this specific sheath is made of hardwood.

(an example of the damage that can be done)

The interesting part about this artifact is not just that it is a sword, but rather because it is different from any sword or blade we have ever seen. The kris is not a classic straight-cut sword.  It has intricate designs which we sought to know the origin and meaning of, not only to understand more about the sword, but to connect our newfound knowledge back to our class. This sword, given the time period it was dated, could have been used in the Filipino-American War, because compared to the U.S. military, the weapons the Filipinos used then were not nearly of the same caliber, nor did they have a unified army to wage a big fight. So, insurrectos would use swords like this as their weapons in amigo and guerilla warfare. The purpose of the sword’s wavy design was to inflict more pain, as the waves have the capability to lengthen the size of the wound while still being a lightweight weapon that warriors could run with. Additionally, the waves are also meant to provide a more smooth stab, as straight-cut blades do not damage the bones as much as curved blades can. The act of using what you have to create the best weapon to inflict the greatest possible damage portrays a strong sense of resistance. Moreover, this artifact is a symbol of the Filipinos’ having to scramble to defend themselves against unprovoked attackers. They did not start a war with weapons at the ready. They were repeatedly attacked by groups of people whom they had not harmed. They had to create weapons like the kris out of necessity, the desire to survive, and to resist the colonizer.

This artifact relates to our personal lives because many of us have ancestors that were in the Philippines during the time of the Philippine-American war, fighting for one side or the other. It relates to communities I belong to because my family has been active in the United States military since at least the 1880’s, so it’s very possible they were present in the Philippines at the time a kris like this was being used in battle. It also relates to the Filipinx-American community because they also can likely trace an ancestor who fought for the Filipinx side way back during the Philippine-American war. This relates to the study of Filipinxs because it keeps the history relevant and accessible. The purpose of an artifact is to spark a question, thought or debate; that is exactly what has been made possible with this Open Textbook Artifact Project. This project helped us learn to shift the narrative by using context. Just as the textbooks alone can’t teach you everything, neither can the artifacts. Artifacts should be used as supplemental tools for learning to help expand on ideas learned through textbooks. In being able to engage with the artifacts, we have learned to not take everything written in the textbook at face value, and how to apply what we can learn from one culture’s history to another. This project has been helpful in helping shift the analytical lens from a top-down perspective to a bottom-up perspective. In other words, we tried to use the artifact to help create a narrative, rather than trying to fit the artifact into a pre-existing narrative composed of previous assumptions and knowledges. Hopefully, viewers will learn something about the kris. But more importantly, we hope that they learn why artifacts are important and how to engage with them in context in order to create a meaningful narrative.

We would like to acknowledge Kathy Dougherty, Rose Mathison, and Professor Holly Barker for supplying us information about our artifacts and allowing us to have access to this opportunity, Professor Bonus for all he has taught us, and finally, our class :).
✦✧✦✧ 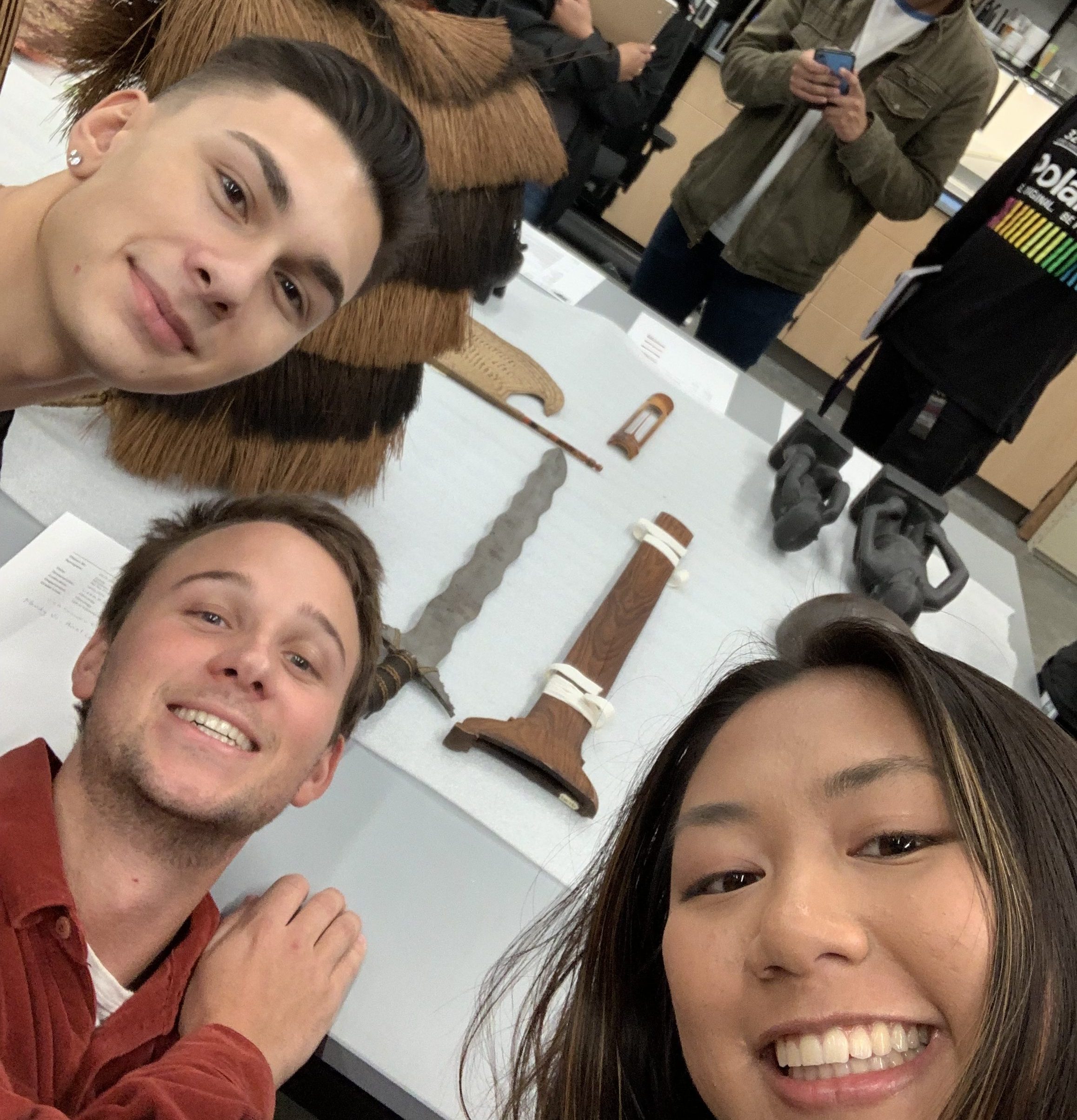