Wind and solar are expanding with such rapidity that it’s clear that much of the electricity on the planet will soon come from the sky instead of the ground. There are quite a few other renewable sources, however, that could expand in future years to provide large amounts of clean power as well. Some have benefits that are needed to complement solar and wind, like the ability to respond quickly to demand changes.

Not all lower carbon sources belong in a 100% clean energy future however. The table below includes some power sources that are passed off as climate solutions, but are rejected by climate justice groups. Governments and corporations are sometimes given financial incentives for constructing such sources, so it is important to know that not all groups have the same definition of clean energy.

For more information about the above, as well as objections to strategies like carbon pricing, geoengineering, and carbon capture, you can read the zine-format Hoodwinked in the Hothouse: Resisting False Solutions to Climate Change, co-written by 16 international climate justice organizations.

Why use combustion to create heat if you have some lava nearby? Within select locations around the planet, very hot rocks exist near the surface. These can create wonders of nature like hot springs and geysers, and are often nearby volcanoes or fault lines. Heat steadily oozes up from the hot core of the Earth, which is hot both from the planet’s initial formation and from radioactive decay of elements.

The heat from the ground can be used for a variety of purposes, like heating of buildings, cooking, and drying of building materials. The first geothermal plants simply drilled into the ground near hot springs, and used the steam rising up to turn a turbine. These are simple to build and reliable, but release pollution into the air along with the steam.

Geothermal electricity is used in diverse geographic regions around the world, including the United States, Indonesia, Costa Rica, Kenya, Turkey, the Philippines, and Iceland. Worldwide geothermal nameplate capacity is 14 GW, up 40% in the last decade. The capacity factors for this source are over 90%, and plants can be run to follow the demand throughout the day or changes in supply from solar or wind.

Enhanced geothermal is an up-and-coming technology that pumps water underground to fracture rock and extract more heat from the ground in places where water doesn’t naturally occur to exchange heat. If drilling and injecting fluids underground to fracture rock makes your stomach churn a little, I’m not surprised: this is fracking technology, as used in methane gas operations. The enhanced geothermal industry claims that many of the dangers from fracking, like earthquakes and water pollution, are not nearly as likely with their operations. First, earthquakes are less likely because fluids are injected under less pressure, and water pollution is less of an issue because clean water would be pumped underground.

Some have argued that the geothermal industry could be a beneficial part of a just transition away from fossil fuels, since those working in the oil and gas industry could put their skills to use. Another important use of their skills would to cap all the leaking fracking wells scattered across locations like the Permian Basin, which are belching out copious amounts of methane gas. There is also a large amount of drilling equipment that will likely be available for discount purchase following the inevitable end of the fracking and oil industry which could be repurposed for geothermal.

Concentrating solar power is one of the most visually striking clean energy sources. Mirrors arranged in a circular pattern, all reflecting sunlight into a brilliantly shining tower in the center, evoke retro-futuristic visions of what a better world could be like, imagined from innocent, optimistic perspectives of the past. Solar power towers, these most stunning plants, have up to tens of thousands of mirrors trained at a central target filled with fluid. 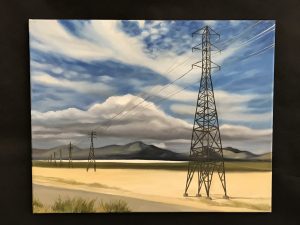 There are several types of concentrating solar power, some less dramatic than the power tower system described above. Parabolic mirrors can be used to heat fluid in a pipe placed at the focal point of the mirror, located less than a meter in front. These systems end up looking like rows of bleachers placed across the desert floor. The heating fluid from many of the rows are gathered into an area where it’s used to turn a turbine and create electricity.

The fluid from concentrating solar power of either type is used to turn a turbine, or if facilities are set up, heat can be stored for several hours and used for electricity generation later. Molten salt is often used as a fluid that melts under high temperature, so stores heat both from its temperature and its change in phase from solid to liquid. Storage of energy is critically useful to complement photovoltaic power, which must be used as it is generated. There is often an increase in electricity demand in the evening, as people turn on appliances at their homes, and this increased load cannot be met by photovoltaic generation. Use of concentrating solar with only a few hours of storage can be used to satisfy demand during those hours.

Worldwide, concentrating solar power currently has a nameplate capacity of 6.5 GW, only a few percent of its more rapidly expanding cousin, photovoltaic. Spain leads the way with 2.3 GW, followed by the USA with 1.8 GW, and Morocco, South Africa and China each have around 0.5 GW of nameplate capacity. Large facilities are being built in Dubai and Morocco.

The first large tidal power plant was built in France in 1966. In a location in Brittany where the difference between high and low tide is about 8 meters, a large wall was built that allowed water to be funneled through turbines under the influence of gravity. The plant was extremely expensive to construct but paid for itself some 20 years after its initial construction. It still produces nearly half of the world’s marine power each year.

The second tidal plant started as an environmental fiasco. A dike was set up in 1994 to create an artificial lake, Lake Sihwa, southwest of Seoul, Korea. This was designed to reclaim some of the tidal lands, and create a reservoir that could be used for irrigation of crops. The lake immediately became highly toxic however, with low oxygen levels, heavy metals, organic material and other pollutants. Seawater was essentially immediately let back into the lake to try to fix the pollution problem. As a way to increase seawater circulation even more, plans for a tidal power plant started in 1999. It eventually went online in 2012. This power plant is now the largest ocean generation source in the world, and makes up roughly 50% of all ocean power. It has had an insignificant effect on water quality in Lake Siwha, which is still polluted.

Wave power is another way to generate power from the ocean, but so far it’s looking more like a wipeout than a surfer getting barreled in a gnarly tube. There are some natural benefits of wave power, like the fact that waves are generally more consistent than winds above it. Waves are created by wind, but since they propagate through the ocean after they’re formed, waves at any given location are representative of the winds around a broader area.

Waves provide steady up and down motion, which can be captured with generators placed at the surface of the ocean, completely submerged underwater, or connected to the shore. The challenge with wave power is capturing all that kinetic energy with a generator that also can stand up to all the jostling around. A large project in Portugal closed two months after its debut due to mechanical trouble. A smaller project connected to the shore in Spain has been more successful.

The Labor Network for Sustainability is seeks to build bridges between the labor movement and the climate movement, and “engage workers and communities in building a transition to a society that is ecologically sustainable and economically just.”