What would happen if everything just stopped? What if all the smokestacks, all the power plants, and all the engines just turned off? We’ll consider this thought experiment to help understand the timescales of pollutants and which should be decreased most rapidly. Before this “world without humans” exercise, though, we need to talk about an attitude within certain segments of environmentalism that takes the idea of a pristine natural environment to hateful extremes.

How to be an anti-ecofacist

It might sound harmless to want to protect the non-human members of the animal kingdom from human influence. After all, we are all interrelated, and protecting endangered species from exploitation is not only the right thing to do but benefits humans too. Many early efforts to preserve nature, however, were closely related with expulsion of Indigenous people from their land. And the focus on a narrow vision of the environment that is separate from humans can lead to neglect of the very real environmental justice concerns of people who live with pollution every day.

White supremacist ideology can be seen in many famous early environmentalists. Theodore Roosevelt and Madison Grant held highly racist views about the rights and abilities of Indigenous people as land stewards, and expressed anti-immigrant hatred as well. The preservation of the natural world by many early conservationists was for Northern European whites only.

Scientists of the day were often complicit. The pseudo-science field of eugenics, which encouraged forced sterilization procedures on those who were perceived to be less intelligent or weaker, was founded by Francis Galton, a highly respected scientist in his day who also dabbled in the field of atmospheric science. Eugenics provided a scientific veneer for racist population control programs. Eugenics was not just a theory: it was practiced in the United States until the 1970s, and inspired the Nazis.

Scientific concepts that are still taught today were created to push white supremacist narratives, stoke anti-immigrant fear, and encourage resource hoarding. The author of the “Tragedy of the Commons” Prof. Garrett Hardin was racist, Islamophobic, anti-immigrant and advocated for eugenics. Hardin was identified as a white nationalist by the Southern Poverty Law Center, and advocated for withholding of food aid to countries experiencing famine because of concerns about overpopulation. One section title of the original Tragedy of the Commons paper is “Freedom to breed is intolerable,” and there are quotes like “if we love the truth we must openly deny the validity of the Universal Declaration of Human Rights.” This corrosive, despicable ideology needs to be exorcized from environmentalism. Hardin’s ideas about the public ability to manage shared resources are not even correct: economists such as Elinor Ostrom have shown that common resources can be managed well.

Ecofascism is the hateful ideology that imposes human suffering in the name of protecting nature. Often highly xenophobic, racist, and ableist, these ideologies are experiencing a resurgence, driven by fear of the unknown and hatred of those who are different. Ecofascist ideologies were especially visible recently in the onset of the COVID-19 lockdowns, in statements like “Nature is healing” or “Humans are the virus.” In a world with so much inequality in the sources of environmental problems, it’s absurd to lump all humans into the same boat. The ecofascist posts were called out by many, and spawned some pretty good memes in response.

Now that we’ve established the need for anti-ecofascism, we can return to the “world without humans” example, as a way to gain knowledge about just climate action. There are a few relevant timescales that would play out after emissions cease.

First, within a week or so, air pollution aerosols that are emitted from sulfates, black carbon, and organic carbon would fall out of the air. In the most polluted industrial centers, skies shed their haze and revert back to deep blue. When we stop combustion of fossil fuels or biomass, the air quality benefits are immediate. Health outcomes improve right away too.

The darker side of air pollution cleanup is that it reveals warming from greenhouse gases that had been previously hidden. All of that negative radiative forcing, from polluted air reflecting back sunlight, disappears along with the haze. Rapid global warming would result from the cleanup. It’s important to note that the current aerosol radiative forcing has significant scientific uncertainty, so we don’t know exactly how much immediate warming would result. 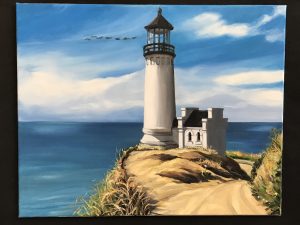 Methane has a timescale of around a decade in the atmosphere. As the methane eventually reacts away, its heat-trapping effect ceases. Since the methane-induced warming is roughly similar to the pollution-induced cooling, the temperatures drop back down to a similar level as today after a few decades.

Carbon dioxide has a number of timescales, each associated with different reservoirs of carbon. Some would decrease quickly, as carbon equilibrates with the upper ocean (timescale around 4 years). The land would draw down carbon on a slower timescale, around 40 years. The deep ocean takes a long time to circulate, as seawater drifts in the abyss for centuries before rising to be exposed to the atmosphere. The timescales of the deep ocean are around 400 years. A decent fraction of the carbon dioxide, though, stays in the air for much longer. The final timescale is associated with weathering of rocks, returning the carbon to the solid earth. Some of the carbon we emit stays in the air for tens of thousands of years.

Estimates of the temperature change that would result are displayed below, showing the initial rise from aerosol cleanup, the decrease from methane, and the long persistence due to carbon dioxide. Several aspects of this have legitimate scientific uncertainty.

What does this mean in terms of stopping global heating?

In short, it means that we expect heating to continue until we stop emissions. But different pollutants have different effects.

Air pollutants: These should be removed as quickly as possible because of health effects. There is an instant benefit to air quality when pollution sources are removed. We should expect some hidden heating to occur as skies clear though.

Methane: Its emissions have a short term effect. So a decent fraction of the warming we are experiencing now is due to methane that was emitted over the last decade. However, over the long term, the longer lifetime heat trapping gases are more important. If there’s ever a “choice” to reduce carbon dioxide now and methane later, we should reduce the CO2. If instead, methane is reduced now, and CO2 later, there is extra warming due to the larger cumulative carbon dioxide emissions.

Carbon dioxide: As both the main cause of global heating and with effects that last essentially forever, we need to decrease emissions of CO2 as rapidly as possible.

One way that is often used to put different pollutants on the same quantitative ground is carbon dioxide-equivalent emissions. Although there are drawbacks to this method, it is important to understand the details of the calculation.

First, one must decide on a timescale over which equivalence is to be measured. The standard for this is 100 years, but sometimes 20 or 500 years are chosen as alternatives.

There are drawbacks to CO2-equivalent however. Consider the temperature change from a pulse of methane and a pulse of CO2. In order to do this calculation one has to make more assumptions: how quickly the ocean warms up, the climate sensitivity, and parameters for exchange between the surface and deep ocean. The parameter uncertainty is a reason why metrics like this aren’t considered as much as CO2-equivalent. The temperature change from a 15 year pulse of CO2 is compared with that of a 15 year pulse of an equivalent amount of methane is plotted below.

Temperature change from a 15 year pulse of methane compared with a pulse of 32 times as much carbon dioxide. These numbers were chosen so the CO2-equivalent emissions (100 year timescale) would be the same. The time of zero years is when the pulse is turned off.

The temperature change from methane is concentrated within the first few years and decreases substantially within a few decades. The temperature increase from carbon dioxide, though, lasts quite a long time, exceeding the methane value after 30 years and soon after becoming twice as large.

A 20 year timescale for global warming potential is often used to emphasize the importance of methane emissions even more. The results of the same experiment as above but using the same CO2-equivalent over 20 years is below.

Temperature change from a 15 year pulse of methane compared with a pulse of 84 times as much carbon dioxide. These numbers were chosen so the CO2-equivalent emissions (20 year timescale) would be the same. The time of zero years is when the pulse is turned off.

This set-up shows an even more rapid overtaking of the CO2-induced temperature change, after a decade. When considering the future warming effect, 20 year global warming potential is not a particularly good measure.

For a cessation of the long term temperature effect, we should hurry especially to reduce CO2 emissions and other long-lived heat-trapping gases, even more than the CO2-equivalent emissions suggest.

The Indigenous Environmental Network was founded in 1990 as a grassroots organization of Indigenous peoples working for environmental and economic justice.