Passenger travel is always a hot topic in climate action debates, but freight attracts much less attention, despite the fact that around 40% of transportation emissions are from moving goods. In the COVID lockdown year of 2020, freight was 50% of transportation emissions, since passenger travel dropped so much. Trucks make up about two-thirds of freight emissions, and maritime shipping makes up another 20%; both are quite difficult to electrify as we will show. Delivery times are becoming ever shorter, but how much of this is freight that can’t wait? And what burdens are placed on the workers, local residents, and frontline communities to move these goods?

Worldwide, goods travel the largest distance over water, about 70% of total ton-kilometers traveled. International shipping has its own category in heat-trapping gas emissions by country, and is a larger source of emissions than all but five countries. In 2018, the total shipping emissions, including domestic, international and fishing, was 1.056 Gton CO2, nearly 3% of global emissions.

Over 10 billion tons of material are moved each year via maritime shipping, in nearly 100,000 merchant vessels. Hundreds of thousands of ships are active on any given day. The instantaneous positions of all active cargo vessels, tankers, fishing boats, passenger vessels and other boats worldwide can be tracked here, a fascinating depiction of the omnipresence of large vessels across the planet.

Most maritime freight is transported using some of the dirtiest fuels in existence, bunker fuels, the literal bottom of the barrel of petroleum refining. These fuels spit out many toxins in their exhaust including sulfates, particulate matter, and NOx. They affect clouds and even create lightning. When these shipping vessels approach port, they often bring with them some of the worst pollution that an area experiences. Many ships burn tons of fuel per day while they’re in port to keep the power running on the cruise ship or shipping vessel; this could be mitigated with shore power, where electricity from the local grid is used instead.

The shipping industry recently placed restrictions on the maximum sulfur content in their fuel, which went into effect in 2020. The sulfur content limit was reduced from 3.5% to 0.5%. In comparison, road diesel in the United States contains a maximum of 0.0015% sulfur. The oil industry calls the new shipping blend “very low sulfur fuel oil” (VLSFO), but it’s certainly not “very low” compared to even the most polluting heavy trucks, since it contains over 300 times the sulfur as in those vehicles. There is also evidence that despite lower sulfate emissions, VLSFO has larger black carbon emissions than older bunker fuels.

There are additional emissions restriction zones around ports in the United States, Canada, and Northern Europe which require 0.1% sulfur content fuel. Ships achieve these levels of emissions either by fuel switching, or with exhaust cleaning systems called scrubbers. Scrubbers are used in over a quarter (by capacity) of ships, most added in the last few years to meet the new standards. Many of these systems exchange one type of pollution for another, by dumping the waste straight into the ocean water. Much is discharged close to the shore, and the wastewater can include carcinogens, heavy metals, and nitrates. Cruise ships use these devices too, and discharge their waste in an even higher proportion within ports, where they can potentially build up over time. Seattle has banned the release of wash water in its port. Some scientists have claimed to have already detected impacts of this kind of pollution on small crustaceans in the North Sea.

So how to we clean up all this shipping? Several freighter ships around the world have added retractable sails to their vessels, to use the power of the wind for an assist with propulsion. Some prototype designs additionally add turbines below the surface that can charge batteries for electric propulsion when winds are weak. Solar panels can provide power for electric propulsion throughout the route.

Hydrogen fuel cell propulsion can also be used in large freighters, and ships can actually produce their own hydrogen via electrolysis along the way from seawater and electricity. Low and zero carbon emissions fuels are currently used in less than 0.1% of international shipping. Until these are implemented, a zero-carbon solution that some companies are using to deliver goods is old-style sailing ships.

When the shipping industry invests in polluting technology like liquefied natural gas (LNG), it can often set the stage for years of higher emissions. The high leak rate of methane that occurs with LNG means a particularly large impact on global temperatures immediately. A proposed LNG project in Tacoma, has been strongly opposed by the Puyallup Tribe of Indians and dozens of allied environmental and social justice groups. “Kayaktivists” have taken to the water to protest the facility, arguing that this project is a clear instance of environmental racism.

In addition to air pollution reduction, removing bunker fuel from ships would also lower the risk of oil spills. A recent major spill incident occurred in the Indian Ocean island nation of Mauritius, in an ecologically sensitive area that is already suffering from coral bleaching due to warmer ocean temperatures. Tens of thousands of local residents helped with the cleanup effort, and were exposed to chemicals from the VLSFO fuel. The fuel that leaked from the ship was an unusual blend that scientists could not fully identify, and supplier BP has not provided a sample of fuel for further analysis which would help for understanding future ecological consequences on people, whales, coral and other marine life.

Rail is particularly efficient at moving goods, requiring a fourth less energy in transit than heavy trucks. When electrified, the emissions can be extremely low too. But infrastructure is costly and energy intensive to build, and it is not clear that given the rapid demand for quick delivery goods, that freight transit by rail will expand much. Most freight rail today is used to move grain, coal, and other minerals. Higher value and lighter goods are typically moved via trucks.

There are groups in the USA that want to add electric wires above freight lines, electrifying the currently diesel powered fleet and providing long distance power transmission as well, which is needed to move renewable power like wind from the Great Plains into population centers.

Trucks are highly polluting and their fuel usage is enormous. For instance, although they make up only 6% of US vehicles, trucks consume 26% of the petroleum in the US. Although there are very few electric trucks on the road right now, there are now electric options for every class of trucks. Prices have fallen and are projected to continue, so that the lifetime cost of the vehicles is either already less than diesel models, or are projected to be soon. The upfront costs, however, are significantly higher. Electric trucks save money over the long-term since electricity is much cheaper than diesel and the maintenance costs for electric vehicles are significantly less. Charging infrastructure is a concern for fleet managers as well. With such large batteries, the need for rapid charging systems is even more critical than for lighter vehicles.

Government policy can aid with the transition with all of these aspects, and is already doing so. The California Air Resource Board (CARB) has standards that mandates the production and sales of electric trucks, which will begin to phase in in 2024. Other states have agreed to follow suit.

Most zero emissions trucks available now are battery electric, but hydrogen fuel trucks are being developed now as well. A wild card for the future is autonomous driving technology, which is being developed for trucking and may be 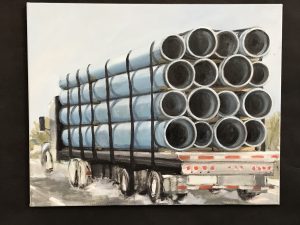 The trucking industry is a huge employer: 3.5 million people work in trucking in the US alone. If there are large job losses in the trucking industry, either from environmental regulations or from self driving vehicles, it’s important to ensure a just transition where workers can obtain other jobs, training or access to early retirement.

The Protectors of the Salish Sea are “ending the era of fossil fuel foolishness in the Salish Sea as soon as possible through Indigenous wisdom, understandings and solidarity.” The Coast Salish are the Indigenous peoples that live between so-called western Washington and southwestern British Columbia, and the Salish Sea is the term for the waters that includes the so-called Puget Sound, Strait of Juan de Fuca and the Strait of Georgia.