As opposed to vowels, the pronunciation of consonants requires a certain degree of obstruction, which is produced in the oral cavity by various organs and muscles like the tongue and the teeth.  In this chapter, you will be introduced to several articulators that are crucial for producing the sounds in any language.  However, for now, you will learn about the three factors that play a role in the production of Spanish consonants:

Point or place of articulation has to do with the organs that are involved in the production of consonants.  Generally, this entails the interaction of two organs or articulators that make full contact or come close to making contact.  In the first  diagram, you can see the articulators in question: the lips, the teeth, the tongue, the alveolar ridge, the palate, etc. 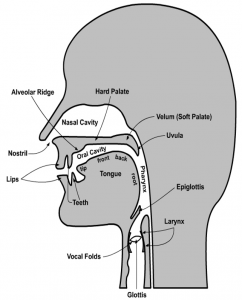 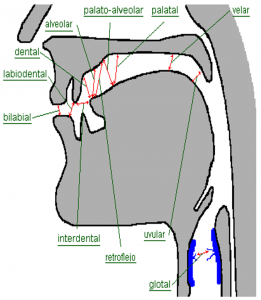 In the table below, you will find a list of the names of sounds according to their point of articulation as well as the articulators involved in their pronunciation.  Please pronounce the sounds in the right column after the speaker making sure you feel the articulation point for each sound.

ATTENTION!  When pronouncing consonants, please keep in mind  that they are softer in Spanish than in English.

Manner of articulation refers to the way the airflow travels from the lungs through the oral cavity.  In some cases, there is a total, although temporary, obstruction.  These sounds are called “stops” and some examples are /b/, /d/, /p/, and /t/.  In other cases, the air travels without obstruction and only with a degree of friction.  These sounds are known as “fricatives” and examples include /f/ and /s/.  Furthermore, the air can escape through several ways like the front of the mouth (oral sounds) or the nasal cavity (nasal sounds).

The role of the vocal cords makes reference to whether the production of a sound requires or not the vibration of the vocal cords.  For example, put your hand on your throat and say any of the vowels.  You will notice that there is a vibration and that, therefore, all vowels are “voiced” sounds.  Now say the letter “s” and you will notice there is no vibration.  This means that the “s” is a “voiceless” sound.

It is important that you understand what you have learned in this chapter.  Please take this quiz before continuing: