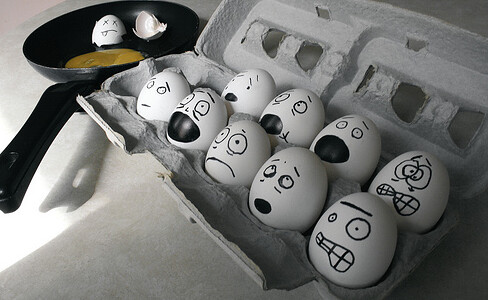 “Stress” by Bernard Goldbach, CC BY.

In this chapter we focus on prosodic stress.  Prosodic stress refers to the prominence that one or more syllables receive relative to others in a given word.  The prominence of stressed syllables is attained by means of pitch, length, and volume.  In Spanish, every word has only one stressed syllable.  In English as well as in Spanish, stress has a distinctive function, which signifies that identical words that are stressed differently mean different things.  For example, the English word “permit” is a noun when stressed on the next-to-the-last syllable and it is a verb when the accent falls on the last syllable.  In Spanish, the word “práctico” is and adjective and it means “practical.”  “Practico” is a verb that means “I practice.”  “Practicó” is also a verb and it means “s/he practiced.”  The stress can fall on the last syllable, the second-to-the-last syllable, the third-to-the-last and, in rare occasions, on the fourth-to-the-last syllable.

The Spanish accentuation system is a very economical system, since most words do not require an accent mark on the syllable that receives the prosodic stress.  Only those who do not conform to the general rules of accentuation require a written accent.

1. In Spanish, words that end in a vowel, “n” or “s” have naturally their stress on the second-to-the-last-syllable and they do not require an accent mark.  Listen to the examples.

2. Words that end in a consonant other than “n” or “s” receive their stress on the last syllable without an accent mark.  Listen to the examples.

3. Words with the prosodic accent on the third-to-the-last syllable will always have a written accent.  Listen to the examples.

4. In rare occasions when two pronouns are attached to a verb, the word will receive its stress on the fourth-to-the-last syllable.  Listen to the examples.

5. All the exceptions to rules 1 and 2 take an accent mark.  Listen to the examples.

QUIZ TIME!  Now, taking into account the rules of accentuation, indicate whether the following words require a written accent.  The prosodic accent is marked in bold and italics.

Discrimination exercise.  Listen to the recording and indicate where the stress falls on the following words.