Casey Chen is receiving her B.S. in Chemistry in March, 2021 from the University of Washington. Her current research is on mass spectrometry in biological systems, and she is planning on attending graduate school to pursue her Ph.D. in Anlytical Chemistry. 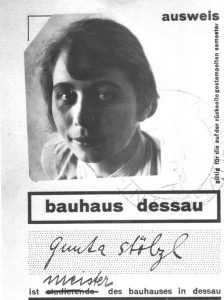 Gunta Stözl[1] (1987 – 1983) was a German textile artist and weaver. She was one of the only female masters of the Bauhaus and head of the weaving workshop from 1926 to her dismissal due to political pressures.

Gunta Stölzl was one of the few female Bauhaus masters and eventually became the head of the weaving school. Her work transformed weaving’s overall connotation from a “woman’s work” to a more respected art form. As a master, she was able to transform complex ideas and patterns in textiles to upholstery, wall hangings, suit materials, and table cloths. All of which contain some functional aspect. The merging of different materials in many of her pieces (wool, silk, cellophane, etc.) demonstrates an immense amount of technical prowess.

As a master, Stözl placed a lot of emphasis on the functionality of textiles, with her experimentation of different fabrics, such as cellophane and synthetic fibers. For example, in the following chair she had created in collaboration with Marcel Beuer, the woven textile is simple and yet structurally sound and functional. As a master, she was able to transform complex ideas and patterns in textiles to upholstery, wall hangings, suit materials, and table cloths. All of which contain some functional aspect. The merging of different materials in many of her pieces (wool, silk, cellophane, etc.) demonstrates an immense amount of technical prowess. A large majority of her work embodies the idea of functionality with aesthetics. This coincides with the Bauhaus’s emphasis on industrialization and primary shapes, as well as the beginning of modernism.

In one of her letters titled “The Development of the Bauhaus Weaving Workshop”[2], Stözl writes that “They [woven fabrics] have to serve their “purposes”, have to be integrated, and have to fulfill with ultimate precision the requirements we place on colour, material, and texture”. Her emphasis on functionality reflects the Bauhaus’s approach of the unity of mass production with aesthetics.

Aesthetics vs. Functionality and Gender

In my own design and artistic experience, I have personally placed more emphasis on pure aesthetics. Weaving and embroidery are merely hobbies for me and a way to add color and interest to textiles in my own life, so of course I may not have much expertise in terms of making functional objects. As a personal example, my midterm project for the course, “Waiting”, was created through embroidery designs and stitching onto N-95 masks used during the 2-week quarantine between me and my roommate. This work was largely aesthetic – as the stitching from the needle and the holes created render the masks useless for the purposes of preventing respiratory droplets from travelling, which is a stark reversal when compared to her work. I transformed something functional into something useless and ineffective through my art, whereas she did the reverse.

While my leisurely art project cannot compare directly to the work that Gunta Stözl was doing during her tenure, it speaks to the different emphasis and privilege of being able to choose between the two – aesthetics versus functionality, bringing me to the main topic I want to touch on in this essay. Specifically, the privilege of choice and the necessity of functionality due to weaving’s connotation as “woman’s work”.

The Bauhaus was advertised as a revolutionary, modernist institution where the ideals of mass production and a new era of design were discussed, but its stances and policies as an institution in regard to gender was still extremely traditional and conservative. Despite the intricacies involved in weaving – the interlocking threads, patterns, and colors, weaving itself as an art form was never quite respected as more traditionally “high standard” art forms, such as painting, sculpting, etc. During Gunta Stözl’s residency and tenure at the Bauhaus, weaving was transformed into an art form that was not only aesthetically pleasing, but also industrial and practical. Her time at the Bauhaus and as head of the weaving workshop became one of the school’s largest sources of income. However, her contract’s salaries and other terms still paled when compared to the benefits of her male colleagues. This blatant and not really subtle discrimination in wages and benefits speaks to the pervasive sexism of the time and was carried down from earlier times.

I think it is also extremely important to speak to the fact that Gunta Stözl is the “token” woman master of the Bauhaus, and even that position was met with an enormous amount of resistance. Her initial tenure was only 3 months. The fact that she was the only female master and that no other female was promoted to a similar position or given many opportunities outside of the weaving school emphasizes the rarity of her promotion. There is no doubt to me that the Bauhaus as an institution likely used the fact that they had one woman master to justify that they were not a discriminatory institution.

Women were also confined to the weaving department and commonly served as models for other artists, thus the role and extent of her work might have been severely limited due to the institutionalized misogyny and sexism. I have had the ability to choose my art and making process in ways that would not have been possible back in the Bauhaus era. Largely, my artwork can just be seen and judged by its merits, the technicality, the skillset, and the message it sends. I have the privilege of using any medium without harsh judgement (mostly) from the larger society about whether or not my art is really considered “art”. However, when women were confined to only the weaving school and denied access to the remaining art forms in the Bauhaus, it is difficult to imagine the other artistic mediums that were taken away. Between aesthetics and functionality in this context, there doesn’t seem like there is much of an incentive to produce artwork that is based purely in aesthetics.

My main question that came up when learning about Gunta Stözl’s work and life is this: How much of her own distinction and emphasis on the functionality and technicality came from wanting the art form of weaving to be disconnected from femininity in order to elevate its status?

Perhaps none of it had been intentional and purposeful, and perhaps she had never thought too much of her role as a woman and was just happy to produce artwork. However, looking at her work from a modern feminist view, I am grappling with the implications of her being confined to the medium of weaving and her own technical prowess and ability. Her affinity for weaving and her incorporation of geometry as well as functionality are defining and unique. Specifically, her use of jacquard weaving, which was commonly associated with industrial mass production of textiles. However, when she first started her studies, she had studied the more traditional art form of painting. There is no doubt in my mind that whether intentional or not, the work that Gunta Stözl had done and her transformation of textiles elevated its status due to the disconnect from traditional feminine embroidery and weaving.

The idea of femininity is complicated and nuanced. The desire of disconnection from femininity is largely due to the direct connotation of negativity with femininity. This applies to the arts in the form of weaving seen as a largely feminine art form and the fact that females were entirely confined to the weaving workshop at the Bauhaus.

In my own work, I have often struggled with the idea of femininity, specifically in the sciences. For some reason, due to the influx of women learning and studying biology, it has somehow become increasingly perceived as a “soft science”, i.e. a different way to invalidate largely female dominated academic areas. I have often resented and avoided going into fields that are largely female dominated, as that typically represents less job opportunities, less pay, and less room for promotion. It’s an interesting and depressing parallel between the women in the weaving workshop at the Bauhaus – largely female dominated areas and little to no opportunities.

Gunta Stözl’s work and her role in transforming weaving from just a “woman’s work” through the incorporation of functionality and design was monumental.

Today, our society continuously devalues any work or field that is largely female dominated. From school teachers in the US to doctors in Russia. The profession itself doesn’t matter, as long as it is oversaturated with women, it is not as respected. There are fundamental issues with the concepts of societal femininity and the exploitation of women workers. In the current day, large parts of our capitalist society rely on the exploitation of people that are undervalued in society – immigrants, undocumented people, BIPOC, etc.

An exhibition by the textile artist Ahree Lee[3] describes the issue in more complexity and clearness than I can – she explores the idea of what a woman’s work is through weaving the statistics of women in STEM on tapestries. As she describes, “Weaving and computing differ in their gender associations and value of labor. […] Textile production drove technological advances from prehistory through the industrial revolution. Yet, the history of textile production is also a history of how women and those without power were exploited for economic gain.”

Our idea of a “woman’s work” is still pervasive in society. While historical figures like Gunta Stözl’s personal ideals and work should be viewed in context of her history, it is rather disturbing to me to see the still persistent parallels between her life as an undervalued master of the Bauhaus to the modern woman in society, including myself.

Make Work Use Art by Timea Tihanyi is licensed under a Creative Commons Attribution-NonCommercial-ShareAlike 4.0 International License, except where otherwise noted.