The terrarium demo is a lab demonstration that allows students to actually see the relevant processes (radiation, evaporation, convection, and condensation) involved in the Earth’s energy transport. In essence, we simulate a mini Hadley circulation inside a glass aquarium. The construction of the terrarium takes some time and resources, but once constructed, the terrarium can be used multiple times for the demo with little preparation.

Students will be able to…

The energy budget of Earth, as a whole, is determined by incoming shortwave radiation in the form of sunlight and outgoing longwave radiation, infrared radiation that depends on the temperature of the Earth. Within the different components of the Earth’s climate system, the energy budget is determined by a variety of energy transport mechanisms (radiation, atmosphere, ocean heat transport).

Since you can see the circulation in motion, the demo provides a way of getting the students to figure out what is going on in the terrarium. Many layers of complexity can be added to the questions, depending on the students’ backgrounds.

Prior Knowledge for Students

Students will know from experience that warm air rises and cold air descends from looking at hot air balloons or from noticing that in winter it tends to be cooler closer to the floor, even when the heater is running. This will help them understand the basic things that drive convection in the terrarium. They will also know from experience that when they jump out of the pool, it tends to feel cold, even if the air temperature is warm. The coolness comes from the loss of thermal energy when the water evaporates from the skin. During evaporation, the body’s thermal energy is being used to turn liquid water into water vapor. This transfer of energy also happens when water evaporates from the sea surface into the air. The energy is transferred from the water into the air.

Many of the students should also understand the different mechanisms of heat transfer: conduction, radiation, convection, evaporation, condensation. It will be very helpful if they understand evaporation and condensation, such as the concept that when water droplets condense, heat is released. For example, a cold can in a humid environment where droplets form on the side of the can will warm up quicker than a cold can in a dry environment at the same temperature, where droplets don’t form on the side, because the air is too dry.

Most of the challenges will be in preparing the demo. First, the terrarium needs to be constructed. Then it needs to be tested before it can be used in the classroom setting.

When running the demo and having the students do the worksheets, the students’ backgrounds on heat transfer may span a wide range. It is up to the teacher to decide whether a lesson on different heat transfer mechanisms is necessary.

Sometimes when the terrarium is run for longer than 30 min, condensation starts to form on the glass walls. You may need to reapply the defogging liquid in that case.

The students will be evaluated on their answers to the worksheet. 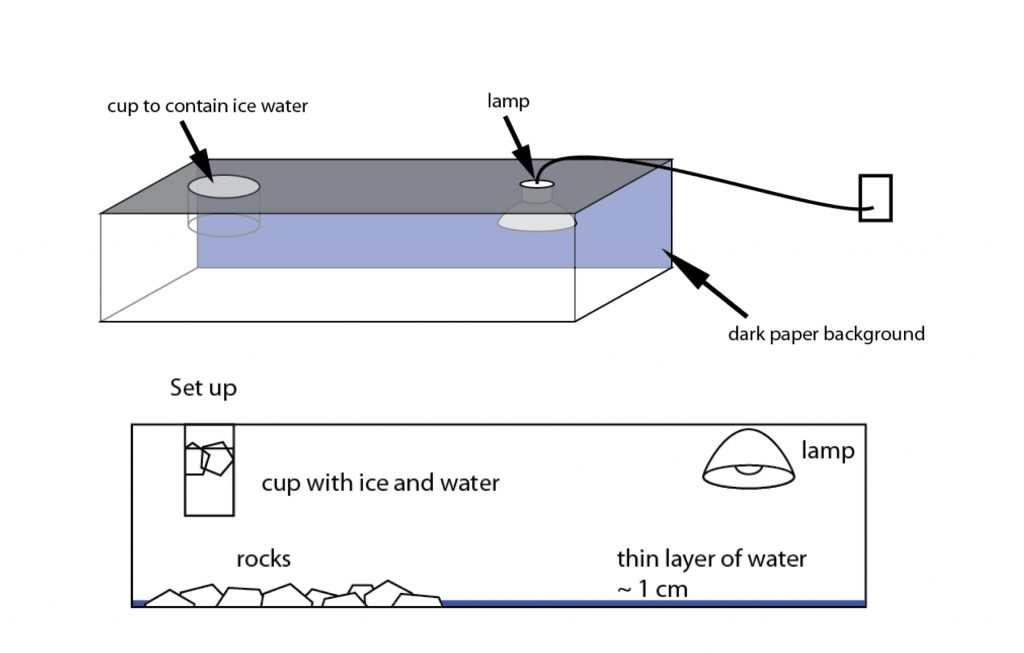 Build the terrarium as seen in the figures above.

Have the students first take a look at what’s going on inside the terrarium.

10 min: Have an initial discussion about different forms of heat (energy) transfer

5 min: Have the students look at the terrarium in action. Have them identify the different forms of energy transfer.

20 min: Split up students into smaller groups, hand out the worksheet, and have them fill out the questions to the best of their ability.

20 min: Go over the worksheet with the students, as a class and see what they came up with.

Suggested questions to get students thinking while looking at the terrarium:

Note: For the questions above, look at the Terrarium Schematic and Answer Key (linked under Materials)

Terrarium Model of Earths’ Energy Balance by Chris Terai and Stephen Po-Chedley is licensed under a Creative Commons Attribution-NonCommercial-ShareAlike 4.0 International License, except where otherwise noted.