Welcome to the third day of the Virtual REACH Program! Yesterday you heard from CNT co-Director Dr. Raj Rao about Brain-Computer Interfaces. Today you will hear from the other CNT co-Director, Dr. Chet Moritz, about a different neurotechnology known as  neurostimulation. The resources below include a brief history of electrical stimulation of the nervous system, an overview of the main types of neurostimulation techniques, and a research spotlight focused on the work of Dr. Chet Moritz and his team. Additional resources are provided if you would like to explore another example of neurostimulation, Deep Brain Stimulation (DBS).

Part One: History of Electrical Stimulation of the Nervous System

A bit of history about electrical stimulation of the nervous system:

With neurostimulation, there are several ways that the nervous system is stimulated:

Today, Dr. Chet Moritz will share how he and his team at the University of Washington are using neurostimulation to help rehabilitate spinal cord injuries. In this section, you will watch a news video and read two articles. Then contribute to today’s Padlet.

Learn about the spinal cord rehabilitation work in the Moritz lab by exploring all three of these resources. These resources tell the story of Joe Beatty, who was paralyzed due to a spinal cord injury experienced during a body-surfing accident while vacationing in Hawaii.

After watching the news video and reading the article, respond to this question on a Padlet:

Post your questions to this Questions about Spinal Cord Stimulation Padlet. See what other VRP participants have posted as well. You can “favorite” the ones you agree with or add comments.

Then, hit the “back” arrow on your web browser to return to this chapter and keep reading.

Another example of neurostimulation is Deep Brain Stimulation (DBS). is a technology that was originally developed as a treatment to help control the debilitating symptoms of Parkinson’s disease, but now being used to treat many other conditions. These other conditions include essential tremor, dystonia, epilepsy, and obsessive compulsive disorder. A deep brain stimulator consists of a device, similar to a cardiac pacemaker that is surgically 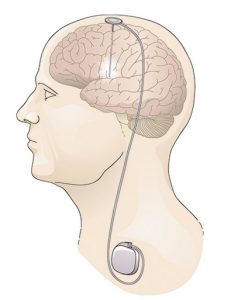 implemented near the neck, that delivers electrical signals to an electrode implanted in the brain tissue. It required invasive brain surgery, but for many patients, DBS therapy has improved their quality of life. Learn more about deep brain stimulation by exploring the optional resources below. In addition, tomorrow’s learning resources will include some information about how neuroethicists have grappled with the ethical implications of DBS treatments and their impacts on the patients who receive them.

Learn about , a technology that was originally developed as a treatment to help control the debilitating symptoms of Parkinson’s disease, but now being used to treat many other conditions, including essential tremor, dystonia, epilepsy, and obsessive compulsive disorder.

Tomorrow we will  discuss the field of neuroethics with Dr. Ishan Dasgupta.  Dr. Dasgupta works with the CNT Neuroethics program that seeks to better understand the ethical issues arising from emerging neural engineering technologies.

A technique for recording the electrical activity of the brain obtained from electrodes placed on the surface of the brain. ECoG is an invasive way to record signals from the brain, requiring surgery to access the brain’s surface.

A technique used by neuroscientists that uses both light and genetic manipulation to control neurons. Neurons are genetically manipulated to be light-sensitive, thus enabling light to cause neurons to fire.

A non-invasive method of stimulating neurons in the brain in which a magnetic field passes through the skin of the scalp and the skull, inducing an electric current in the brain. The maximum  depth that magnetic stimulation reaches is 3-5 cm.

A non-invasive technique in which sound waves travel through bone and soft tissues to the brain. Low-intensity pulsed ultrasound influences neural activity without heating or damaging the tissue.

A device in which electrodes are surgically implanted into brain tissue and connected to an impulse generator implanted under the skin. The device directs targeted, painless electrical pulses to a specific area of the brain.

Virtual REACH Program 2020 by Center for Neurotechnology, University of Washington is licensed under a Creative Commons Attribution-NonCommercial-ShareAlike 4.0 International License, except where otherwise noted.