Welcome to Day One of the virtual YSP-REACH program! Today you will explore the basics of neuroscience and neural engineering.  We will start by describing the structure and function of the nervous system and follow with an overview of neural engineering.  There are readings, videos, quizzes, and a fun activity that should help you understand these topics.  During the Day One lecture, neuroscientist Dr. Eric Chudler (CNT Executive Director & Education Director; Research Associate Professor, UW Department of Bioengineering) will take you on a journey into the brain.

The is designed to receive information from our senses, process this information, and  send signals to muscles, glands, and organs to respond to the information.  This organization ensures the survival of an organism.  The nervous system is made up of the and (the ) and the nerves of the body (the ). You can think of the nervous system as the master control center that is responsible for perception, emotions, movement, thinking, and planning solving.  It is even responsible for functions that do not need conscious thought such as respiration and control of heart rate.

Cell of the Nervous System

There are two types of cells in the nervous system: (nerve cells) and (glial cells).  Neurons are specialized cells that send messages to other neurons, muscles and organs.  Glial cells, such as those that produce insulation, help support neurons. The human brain contains approximately 86 billion neurons and at least the same number of glial cells.  Although glial cells are essential for the proper function of neurons, we will concentrate our discussion on neurons. 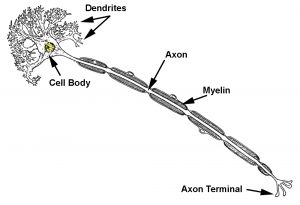 A neuron has four basic parts: 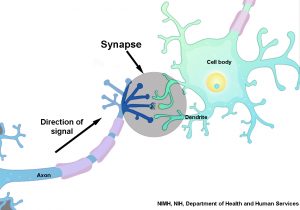 Communication of information between neurons is accomplished by movement of chemicals across a small gap called the . Chemicals, called , are released from one neuron at the axon terminal. Molecules of neurotransmitter then cross a small gap where they may attach to the next neuron at a specialized site called a receptor. The action that follows activation of a receptor site may be either a depolarization (an excitatory postsynaptic potential) or a hyperpolarization (an inhibitory postsynaptic potential). A depolarization makes it more likely that an action potential will fire; a hyperpolarization makes it less likely that an action potential will fire.

Check your understanding with a quick quiz.

Watch how neurotransmission is modeled (using both electrical and chemical signals) in this video.

Action potentials are electrical signals caused when different ions cross the neuron membrane. A depolarizing stimulus first causes sodium channels in the membrane of a neuron to open. Because there are many more sodium ions on the outside, and the inside of the neuron is negative relative to the outside, sodium ions rush into the neuron. Sodium has a positive charge, so the neuron becomes more positive (depolarized). It takes longer for potassium channels to open. When they do open, potassium rushes out of the cell, reversing the depolarization. Also at about this time, sodium channels start to close. This causes the action potential to go back toward -70 mV (a repolarization). The action potential actually goes past -70 mV (a hyperpolarization) because the potassium channels stay open a bit too long. Gradually, the ion concentrations go back to resting levels and the cell returns to -70 mV.

The action potential will travel all the way to the axon terminal where neurotransmitters will be released and the message can continue to the next neuron.

Build a model neuron with things you can find around the house.  The examples below show neurons made from playdough, pipe cleaners, and candy. Get creative!

Then, take a photo of your model neuron and post it to this Neuron Model Padlet. See what other VRP participants have posted as well. You can “favorite” the ones you really like.

Then, hit the “back” arrow on your web browser to return to this chapter and keep reading. 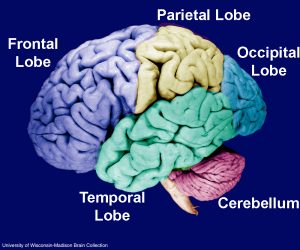 The adult human brain weighs about three pounds (1.4 kg) and contains about 86 billion neurons and trillions of synapses. The brain can be divided down the middle into two halves called the . Each cerebral hemisphere is divided into four lobes by (fissures) and (bumps) that can be seen on the surface of the brain. 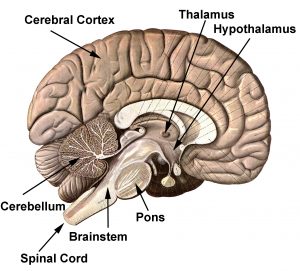 Located below the temporal and occipital lobes is the . The cerebellum helps with movement, balance and posture. The connects the brain to the spinal cord and is responsible for the control of breathing, heart rate, and blood pressure. The brain stem contains structures including the medulla, pons, tectum, reticular formation, and tegmentum. Near the center of the brain is the . The thalamus help direct sensory and motor information to and from the spinal cord and . As the name implies, the is located below the thalamus and is responsible for regulating many bodily functions such as  body temperature,  hunger, thirst, and biological rhythms.

“The  discipline  of  neural  engineering  uses  engineering approaches to understand, repair, replace, enhance, or exploit the  properties  of  neural  systems,   often  accompanied  by scientific  research  directed  at  the  interface  between  living neural systems and non-living components.”

(or neuroengineering) brings together the expertise of people in the fields of engineering, neuroscience and medicine to study the nervous system. Neural engineering has the potential to discover treatments, therapies, and cures for neurological disorders such as stroke, spinal cord injury, Parkinson’s disease, and epilepsy. Some neural engineers are interested in enhancing neural function by improving memory, attention, or sensory abilities. The Center for 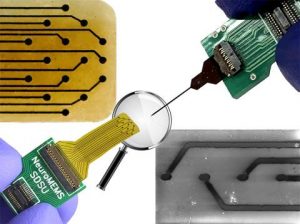 Neurotechnology (CNT) is interested in developing neural devices and methods to direct engineered in the brain and spinal cord. Engineered neuroplasticity uses devices to restore lost or injured connections in the brain, spinal cord, and other areas of the nervous system. The CNT hopes that the research performed by its students, faculty, and staff will improve sensory and motor function for people with spinal cord injury, stroke, and other neurological disorders. Neural engineering research also raises many ethical issues about new technologies that interact with the nervous system. are a system of moral principles, rules, or standards that govern thinking, decision making, and behavior, in particular for how humans think and act in regards to others. These issues are part of the field of include questions of privacy, security, moral, and legal responsibility, changes in our understanding of agency (the capacity of individuals to act independently and make their own free choices), shifts in personal identity, and social justice.

Preview of the Week

As we move through this week, we will explore several neural engineering topics including:

Be sure to join tomorrow’s virtual presentation featuring Dr. Rajesh Rao, who will be sharing his research about brain-computer interfaces.

An organ contained in the skull that functions as the body’s command center. The brain, along with the spinal cord, is part of the central nervous system. It controls movement, functions, sensations, memory, and thoughts. The brain can be thought of similarly to an electric circuit, where sensory neurons receive input, the brain processes this, and motor neurons instigate a response.

component of the central nervous system located within the backbone. The spinal cord connects the brain to the other parts of the body.

The portion of the nervous system that contains the brain and spinal cord.

The portion of the nervous system that contains the nerves of the body.

specialized cells that send messages to other neurons, muscles and organs.  Glial cells, such as those that produce myelin insulation, help support neurons.

Cells that surround neurons (nerve cells), providing support and protection for the neurons.

A lipid (fatty) substance that surrounds the axons of neurons, providing insulation and increasing the rate at which action potentials pass along the length of the axon. Myelin is made up of a particular type of glial cells.

Extensions of the neuron that receive information from other neurons.

Area of a neuron that contains genetic material of the neuron, including the nucleus of the cell, and integrates signals received from dendrites

Single extension in a neuron that takes information away from the cell body.

End of the axon where one neuron can communicate with another neuron or cell.

Chemical or electrical junctions that allow signals to pass from a neuron to another cell.

Chemicals that are released from a neuron at the axon terminal. Molecules of neurotransmitter then cross a small gap (the synaptic gap) where they may attach to the next neuron at a specialized site called a receptor.

The nervous system’s communication method is via action potentials, which are electrochemical changes that originate in neurons, are propagated down their axons, and elicit a corresponding response in the adjacent neurons.

The two halves of the brain, as divided down the middle. Each cerebral hemisphere is divided into four lobes by sulci (fissures) and gyri (bumps) that can be seen on the surface of the brain.

The fissures or grooves that can be seen on the surface of the brain.

The bumps and folds that can be seen on the surface of the brain.

One of the four lobes of the brain. Concerned with reasoning, planning, parts of speech and movement (motor cortex), emotions, and problem-solving.

One of the four lobes of the brain. Concerned with perception of stimuli such as touch, pressure, temperature, and pain.

One of the four lobes of the brain. Concerned with perception and recognition of auditory stimuli (hearing), and memory (hippocampus).

One of the four lobes of the brain. Concerned with vision.

The part of the brain that helps with movement, balance, and posture.

The brain stem connects the brain to the spinal cord and is responsible for the control of breathing, heart rate, and blood pressure. The brain stem contains structures including the medulla, pons, tectum, reticular formation, and tegmentum.

A structure of the brain that helps direct sensory and motor information to and from the spinal cord and cerebral cortex.

The outside layer that covers the cerebrum of the brain. Also referred to as "gray matter".

A structure of the brain located below the thalamus. It is responsible for regulating many bodily functions such as body temperature, hunger, thirst, and biological rhythms.

An engineering discipline that uses concepts from math and science to connect to and interact with the nervous system. Neural engineering is based on the loop between the sensory information that is received by the brain, information that the central nervous system (CNS) sends out, and computers/machines that receive input and produce outputs that feed back into the CNS.

A system of moral principles, rules, or standards that govern thinking, decision making, and behavior, in particular for how humans think and act in regards to others.

The study of philosophical issues related to neurotechnologies; a sub-specialty within the study of bioethics. Neuroethics combines an understanding of neuroscience, philosophy, and the legal system. Neuroethical issues can arise during the design of a neurologically-focused device, drug, or therapy, all the way to the impacts it has once used with patients. Neuroethics deals with complex philosophical issues, such as identity, security, privacy, autonomy, fairness, and justice. Questions include the ethics of the methodology of research studies, accessibility of devices, legality of rights and patents, and delineating the line between human/animal consciousness, volition, and computer/machine influence.

Virtual REACH Program 2020 by Center for Neurotechnology, University of Washington is licensed under a Creative Commons Attribution-NonCommercial-ShareAlike 4.0 International License, except where otherwise noted.