Seattle, Washington is not only home to a booming tech industry, but also part of the Pacific North West known for its coastline, green interiors, and mountain ranges. Although a beautiful area immersed in nature, its own metropolitan area companies have been contributing to its environmental demise. In 2019, the Climate Accountability Institute revealed that only 20 large fossil fuel companies are directly responsible for a third of the world’s greenhouse emissions. This data is astounding considering that some of these companies single handedly produce more carbon emissions than some large countries. The companies that are not directly in the fossil fuel industry are also heavy contributors to emissions and are considered runner ups to the 20 companies mentioned above.

If the majority of the problem stems from these companies, reducing their contribution and making up for the damage already done should be a large point of concern for the climate change advocates. In the past few years, as the climate crises has blown past simply a PR concern for companies, many have announced their plan of action. From our home-city of Seattle, Microsoft and Amazon are two large name international companies in the discussion of company roles in the climate crisis.

This chapter take a brief dive into the initiatives Microsoft and Amazon are taking to address environmental concerns. To do so, there are some terms that need to be defined in order to understand their plans and effectively compare them. A carbon footprint is the greenhouse gasses that have been emitted into the atmosphere through any company related activity. To address emissions, there are numerous actions that can be taken for the ‘removal’ of carbon from the atmosphere. The idea of carbon offsets is to address this carbon footprint through ‘counteracting’ the produced emissions somewhere else. This usually takes form of buying an offset to fund climate change combative projects or taking on these projects as the company itself. To learn more about Carbon Offsets and Cap & Trade, visit chapter 6 here. This can allow companies to become carbon neutral during which there is no net release of carbon dioxide – in other words, the emissions would be countered by absorbing carbon through for example planting trees. The next step would be becoming carbon negative which means bringing the footprint lower than neutral and removing more than what is emitted. Finally, dealing with historic carbon, is working to removing all net carbon produced in the history of the company.

Microsoft, one of the largest international tech companies, has its headquarters in Redmond, Washington. After decades of contributing to the growing carbon in our atmosphere, the company announced some hefty climate commitments. Their detailed plan can be captured through three main goals: making the company carbon negative by 2030, removing all historical carbon emissions by 2050, and investing $1 billion for the cause. The full blog from Microsoft’s President Brad Smith can be found here.

To achieve these ambitious goals, Microsoft has developed an aggressive and clearly documented plan describes their plans to cut their carbon emissions in each major category. Their approach includes shifting towards a 100% renewable supply, electrifying all campus vehicles, introducing an internal carbon tax, etc. While there are various details involved with each step they are taking, overall, they have a data driven approach with clear goals and timeline. From an accountability standpoint, the company has announced an Environmental Sustainability Report which will provides annual updates on the company’s progress for the public.

Beyond reducing the company’s direct carbon emissions, Microsoft has made a clear effort to support new greener technologies by contributing $1 billion dollars to the Climate Innovation Fund. They have pushing their goal of empowering their customers around the world through tools such as the Microsoft Sustainibility Calculator, Vattenfall which allows customers to choose between green energies, etc. Additionally, the company has signed the United Nations’ 1.5-degree Business Ambition Pledge, been vocal about carbon-related public policy issues, and had been leading other companies to do the same. Overall, Microsoft has taken a major leap in taking responsibility for their contribution to the climate crisis, creating detailed and transparent plans to reach high green standards, and bringing other companies and their customers along with them to work towards carbon sequestration.

Another major Seattle-based company name that often comes up in climate conversations is the E-commerce company Amazon. In recent years, the company has been criticized for not addressing the climate crisis and taking any action to mitigate their contribution to carbon emissions. After a year of pressure from Amazon workers for a company-wide plan, Amazon finally released a report of the company’s environmental impact alongside some ambitious pledges in 2019. These goals include using 100% renewable energy by 2030 and reaching overall net carbon emissions by 2040. However, the pledges came in the form of a “Shipment Zero” announcement rather than a detailed plan of action. Their description of the project is limited to improving electrical vehicles, using reusable packaging, and moving towards renewable energy.

There are various concerns around this announcement that climate change advocates have found disappointing. For one, the company is only looking at reaching ‘net zero’ which means they will only add as many tons of greenhouse gases as those that are being removed.  However, this doesn’t address any of the damage that has already occurred since the company started and also allows pollution in vulnerable communities with solutions implemented elsewhere. Additionally, their entire plan solely focusses on the shipment aspect of the company which while considerably large, discounts pollution from the cloud computing business side of the company which is the largest of its kind in the world. 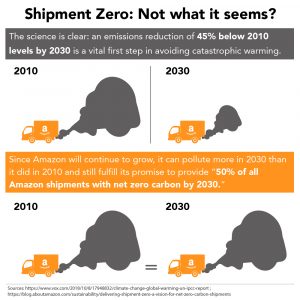 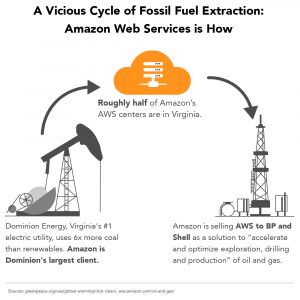 In June of 2020, the company made an announcement to invest $2 billion to the Climate Pledge Fund in order to work towards a low-carbon economy. However, once again, their methodology to reaching their goals hasn’t been fully shared with the public leading many people to believe that their actions are directly related to public pressure and need for good PR. Even within the information they have made public, Amazon’s commitment has been questionable as they produced 15% more carbon dioxide in 2019 than 2018 (Clark, 2020).

Jeff Bezos personally committed $10 billion dollars through his own initiative earlier this year which invests in various climate change projects, but this has somewhat overshadowed the shortcomings of his most famous company. However, his personal monetary donation doesn’t represent the company’s reduction of carbon emissions and environmental damage. Amazon’s response to the climate crisis comes in stark contrast to that of Microsoft in terms of goals, timeline, outreach, and transparency.

Worldwide data very clearly indicates that large corporations play a disproportionately large role in producing fossil fuels, waste, and overall damage to our environment. While some companies have started becoming eco-friendly and plan on addressing or even reversing the damage that has been done, others fail to take responsibility or only do so to capitalize on the go green movement. This is significantly important to think about when trying to create progress against climate change because their actions have a large influence on global climate progress.

Just between Microsoft and Amazon, we see a stark contrast between the responsibility the companies are taking to address previous and current shortcomings. Microsoft has created numerous high impact goals that address various gaps contributing to environment damage and have very clearly outlined the systematic approach the plan on taking. By providing previous and current data on the company’s emissions and the details that build their various interventions and initiatives, they are creating transparency with the public and encouraging to hold the company accountable. Overall, this approach has earned Microsoft a good reputation in the climate community as a sustainability leader (Roberts, 2020).

On the flip side, Amazon has been slow and vague in their response and although they have set their own goals, they have demonstrated very little accountability. Generally, it looks like the company has only been showing interest in the crisis due to external public pressure and they also have shown conflicting actions that don’t support their initiatives. This has led to a lot of criticism from the climate community but also it’s own workers who have been filing petitions to create more company-wide change (Reynolds 2020). Only time will tell how effectively these companies meet the goals they’ve set and whether they will take more initiatives to address and encourage reducing this crisis.

Building a Greener Future: A UW Research Report into Seattle's Climate Justice Movement by Ayushi Desai is licensed under a Creative Commons Attribution-NonCommercial 4.0 International License, except where otherwise noted.