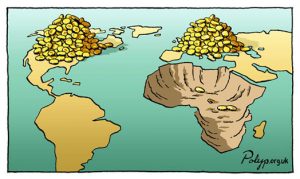 What’s colonialism you may ask? Colonialism is the dominance of a stronger nation over a weaker nation. From the European colonial perspective, colonialism is a practice of obtaining control over other land and communities while exploiting it economically. Conquest has been a thing since the earliest civilizations, and its ideology is the root cause to the damaging climate crisis. Why? Because it comes along with the idea that everything on earth is here to be claimed and extracted, bought and sold.

One could say that it is fairly ignorant that someone can ignore the fact that colonization is the leading cause to the catastrophes of climate change. On the contrary, a great deal of guilt-trip appeals for the world to take alternative means of transportation in order to ‘save the world’ only addresses the least of the world’s problems . The real damage is in the hands of industrial corporations that are responsible for the highest percentage of carbon emissions. In a GQ article by Luke Darby “Billionaires are the leading cause to climate change”, it noticeably argues that the United States richest 1% are actively colonizing the world even as “we’re well past the point of preventing climate change” (Darby). However, if called upon, our leaders have around “12 years to prevent the most catastrophic elements of it from wreaking havoc on the world’s population” (Darby). Here is where we connect the dots. From our perspective the leading corporations on the industrial level, the colonizers in our terms, are to be held accountable through their practices of enriching a small percentage of communities through the labor and pollution of the rest. Otherwise stated, these poor communities are rather powerless to these industries treating them as a business plan, as they continue to further expand their assets. In a book written by Naomi Klein titled On Fire, Klein was keen to notice that it is not as if history repeated itself, because the concept was never lost, rather they are “fundamental myths, woven deep into national narratives” (Klein 20), an idea first brought upon the nations for the colonial powers that were running out of nature to exhaust at home” (Klein 20).  It is clear that these big corporations possess the colonial ideology that comes along with the theories that justified treating humanity as capital assets to exhaust their labor and exploit without limit, is still the same theory that now justifies treating the earth the same way. In relation to current climate colonialism, we see how the government has turned a blind eye to these industrial companies that have led our climate to a damning global crisis, while ruining poor communities as a direct result of the conception of a wealthier lifestyle.

As Washington is facing requests for new gas proposals, Tacoma is the proposed home for a liquid natural gas (LNG) refinery, to be built by Puget Sound Energy (PSE). The people of the Puyallup Tribe are strongly opposed by the proposal for the LNG refinery. This proposal clearly violates the tribe’s treaty rights and once again we witness colonialism at the hands of big corporations. To these corporations, it is just another new way to pressurize gas into a liquid form, meaning more income, and distribution for consumption. However, these companies fail to realize the detrimental effects of natural gas. The Puyallup Tribe took it upon themselves to defend their areas and the community, since Governor Inslee’s rhetoric led to him taking no action in stopping the PSE. According to 350 Seattle, Governor Inslee made his remark on the proposal claiming he “cannot in good conscience support continued construction of a liquified natural gas plant” (350 Seattle), yet proceeds to not prevent the construction of the plant. Again with the empty promises and false hope the leaders of our nation give, which Klein once states, have led the youth’s verdict of these liberal leaders “to be just as damning, if not more so” than their verdict on conservative leaders (Klein 6). Governor Inslee’s act on taking action, or lack thereof, could lead to the accelerating breakdown of the climate. If action is not taken, the majority Tacoma community will possibly have to deal with the risks associated with a gas line constructed only half a mile away from humanity. Not only will this building of the gas line be hazardous, but it is also not going to be cheap. The construction of LNG will be very expensive and these costs will be mainly covered at the cost of residents in the form of price increase in many homes and small businesses. The government’s ignorance to the outweighing negative effects of this proposal exemplifies the colonial narrative of exploiting communities, while disregarding the dangers the community will phase. Not only will this affect the people of Tacoma, but their acts of ignorance are quickly contributing to the global crisis.  [Link to #NoLNG Tacoma chapter]

Building a Greener Future: A UW Research Report into Seattle's Climate Justice Movement by Princess Uzoma is licensed under a Creative Commons Attribution-NonCommercial 4.0 International License, except where otherwise noted.